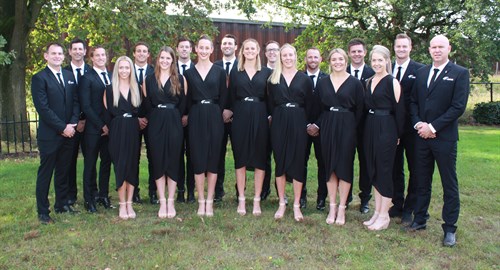 It took 14 years but in 2012, the Black Fins finally broke the Aussie stronghold on the World Championship title and wrestled the cup off Australia. In 2014, the determination was there to back up the win and to create New Zealand surf lifesaving history!

We knew it would be very challenging; not only did we have to be concerned about a wounded Aussie team, but we had the likes of France chomping at the bit to get on the podium.

But the Black Fins were determined to give it their all to create history. The campaign was slightly different to that of 2012 in that we didn't have much resource and, of course, the Worlds were in France, rather than Australia.

The team's belief was also backed up by others outside the team, including two very special Kiwis - All Blacks coach Steve Hanson and Victoria Cross soldier Willy Apiata. These two men not only added to what the team had developed, but they reinforced the values of the team and what they meant to them; this was hugely powerful and we often referred back to these two men in our team talks.

Our aim was to leave the pool in front and look to build on that on the beach, as we did in 2012. There were many successes in the pool, but a few challenges in the SERC events meant we finished second behind France.

We had done our homework with a site visit 12 months before so the beach athletes were more than ready for flat, hard and a sometimes potholed beach at Le Grande Motte. In the early stages of Day One at the beach, the Australian team began to crawl their way back into the event with a handful of good wins.

The Black Fins worked very hard throughout that day and something that will always stick in my mind is Steve Kent's performance in the Tube Rescue with Captain Andy McMillan. As Steve ran in to make his way to the buoys, he dislocated his knee. This was unknown to us until post- race! We all thought he had pulled his hamstring. It was a massive effort and the lift that gave the team was out of this world. The second key moment was when Chanel Hickman knocked her arch rival Melissa Howard out of the Beach Flags. In doing so, Melissa broke her collar bone. The composure Chanel showed alongside her team mate Paul Cracoft-Wilson (Melissa's partner) was outstanding; the event was stopped for close to 40 minutes before Chanel went on to win the title.

The heart showed by the 2014 Black Fins was outstanding and got them across the line to take the win comfortably while creating New Zealand history. Bring on Rescue 2016! (Mark Weatherall, Team Manager) 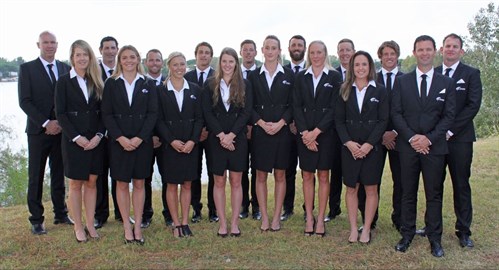 Our Kiwi team was on top of the world having taken the title of Rescue 2012 World Champs for the first time in 14 years.

Rescue 2012 was held in Adelaide, South Australia, from November 7-18 with events held across three venues including Glenelg and Christie's beaches and the state-of-the-art South Australian State Aquatic and Leisure Centre.

New Zealand sent two teams to compete - the open NZ Team (which included Olympians Steve Kent, Steven Ferguson, Andrew McMillan and Natasha Hind) and the Under 20's who competed in the inaugural Under 20 World Championships, held at Rescue 2012. The athletes were meticulously prepared and from the start went in fighting, ready to take the title from the Australians on their home territory.

The Black Fins finished with 844 points to Australia's 765. Key successes came with five golds from the women in the pool including three golds from Samantha Lee on the first day, breaking three world records in the 100 metre rescue medley, the 200 metre obstacle race and the 4 x 50 metre obstacle relay.

Natasha Hind won two gold medals, erasing two seconds off the world record in the 200 metre super lifesaver and shattering the New Zealand record by almost 10 seconds. She also claimed gold in the 50 metre manikin carry, breaking the national record in the process.

Both the male (Kevin Morrison and Max Beattie) and female (Nikki Cox and Devon Halligan) board rescue teams won with Halligan also winning the women's ski race. Chanel Hickman added to the lustre with a beach flags win. The New Zealand women's' taplin team finished in style, winning the last event of the championships. New Zealand captain Andy McMillan couldn't suppress his jubilation, having battled a knee injury throughout the build-up and having swum himself delirious in the pool.

"The Australians are like big brothers to us and a lot of the team train at Aussie clubs alongside these superstars", he says. After the event NZ team captain Andy McMillan commented "Beating them on their home beach is one thing but we absolutely smashed them and that is an incredible feeling. We came here with a mission and we achieved it and the whole team is jumping out of their skins. This feeling will stay with us for the rest of our lives." - Andy McMillan, Team Captain

This international event was hosted by Muriwai in West Auckland and the Waitakere City Aquatic Centre for sea and pool events, though sea conditions saw some events transferred to Long Bay on Auckland's North Shore.  Any world championships require significant dedication and stamina by the organising team and others involved and this event was no exception.

Outstanding performances by the New Zealand team including Trent Bray and Jackie Read in the pool (two golds), Cory Hutchings on the paddle board and IronMan (two golds) and Callum Taylor in the beach sprints and flags (two golds) gave New Zealand the edge over the traditional rivals. Medalists also included Anna Ballara (gold) with Anna Robson, Paul Bethell, Duane Dalton and Kelly Piper all contributing to the gold, silver and bronze tally. This team was welded together by a dedicated management and coaching team.

New Plymouth Old Boys starred in the World Interclub Championships going neck to neck with Durban Surf (South Africa) for top honours. Opunake (Taranaki) won the world IRB single and team rescue events with Lyall Bay (Wellington) a creditable second in the rescue race. The World Masters Championships witnessed a good turnout of Lifeguards aged 30 to 65 years (plus). New Zealand Masters competed with credit and many featured in the medal stakes. There is always an extra sense of fun and friendship connected with any Masters championships and Rescue 98 was no different. 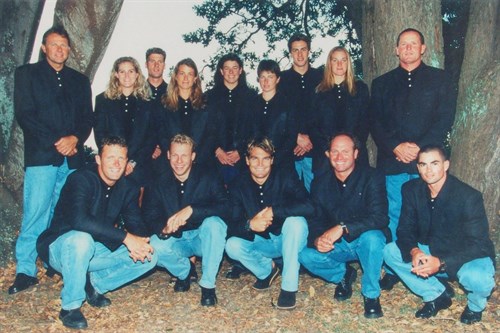