The Cullen family are well known in surf lifesaving circles. Kirsty Cullen has been a member of the New Brighton Surf Life Saving Club for a decade and is yet to face a dull day.

Since joining she has tried her hand at several different roles, helped more than 20 people to become lifeguards and won two awards for her efforts.

Kirsty, who has lived in Rolleston for the past 20 years joined the club along with her husband Andy and two daughters Ashley and Phie in 2012 in a bid to give her girls more knowledge on safety in the water as they were learning to surf.

“At the time they were budding young little surfers following us,” Kirsty said.

“We thought heck they’re really out there in the water and they don’t really know much except for on their surf boards.”

Kirsty loved the club from the beginning and it wasn’t long before regular Sunday sessions turned into taking on a volunteer lifeguard role, also gaining her inflatable rescue boat qualifications.

Kirsty’s family followed suit with Andy and her eldest daughter Ashley qualifying as lifeguards in 2015. 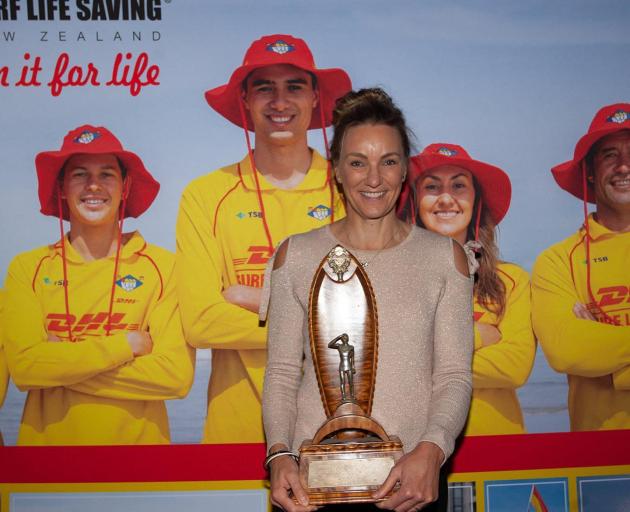 Soon the whole family was on patrol together when youngest daughter Phie became a lifeguard in 2018.

The family became known as the “Cullen patrol” and Kirsty said it sometimes felt like they were just hanging out at the beach together.

“I was really proud,” she said. “It is a nice combo having the family at the beach.”

During 2018 she tried her hand at a few roles, gaining patrol captain and surf official qualifications as well as becoming a lifeguard instructor when the club needed one.

She noticed the club was stretched and didn’t have enough people to get lifeguards qualified so she was more than happy to fill the gap.

“For me it just became a no-brainer because there were these juniors coming through who were so excited about wanting to become a lifeguard so I guess I just showed some interest in wanting to do that,” she said.

Kirsty proved successful in her position as an instructor, helping more than 20 lifeguards qualify before taking up boarding and becoming the junior board coach.

At the beginning of the 2018/19 summer season she moved on to the role of junior surf co-ordinator, a role that she said was pretty big but very fulfilling.

And if that wasn’t enough, Kirsty also became a patrol captain for one of the five patrol groups at the club.

“I didn’t do it alone, but it was my job to run and oversee the whole junior programme,” she said.

“I’m definitely not the only one who gives up a lot of time. There are people out there just like me.”

While she said it was a team effort to run a patrol group, each lifeguard was responsible for themselves.

“At the end of the day, every single lifeguard no matter what age or experience are still trained to spot a person in trouble and to be able to rescue and resuscitate if necessary.”

In 2019 Kirsty took up surf row boating, a skill that she said took a bit of getting the hang of.

“I’ll love my crew forever for being so patient and tolerant,” she said.

That was the same crew that went on to compete in the 2020 Surf Life Saving Nationals in Gisborne, medalling in masters, and making semis and finals for the short and long courses.

“I think we surprised a lot of people,” Kirsty said.

“Out of 11 crews we were the only one from the South Island.”

“I’ve never done anything I’ve done to gain recognition or awards,” she said.

“I’ve only done it to gain competence.”

Kirsty’s favourite part of the job was seeing people achieve their goals and overcome obstacles.

“You might have a seven-year-old who at the start of the summer was way too scared to put their head under or even go out past ankle depth and here they are diving under waves quite happily, I mean that’s massive.”

Kirsty said she feels very lucky to be part of such a great crew and even when they’re all tired and a bit overstretched it’s reassuring to know that they’ve got each other’s backs.

“The tagline that goes with surf lifesaving is ‘in it for life’ well I may have started late, but the phrase is so true. I’ve joined an amazing crew.’’