It was pitch black under the water as Chaz Gibbons-Campbell desperately tried to find the girl he was trying to save in the pounding surf.

One minute the Whiritoa Beach lifeguard was holding onto a terrified 8-year-old girl as waves broke on top on them. The next minute she was gone and he knew it was highly unlikely she'd make her way back up to the surface on her own.

"I was like 'no', I thought she was gone. I was frantically trying to feel around for her in the dark."

It was a moment no lifeguard wants to experience - being caught at sea, trying to help a child and fearing she might not make it.

Gibbons-Campbell, who has been a lifeguard for 12 years, was off duty at Coromandel on January 3 when he headed into the water to go body surfing.

The weather was good, the skies clear and swimmers were enjoying the waves at the foreshore. A group of surfers were sitting on the break about 70m further out.

After swimming out he chatted with some of the more experienced surfers who described the waves "as heavy with a long holddown - conditions that throw you around like a washing machine if you get caught underneath them when they break".

At that stage Gibbons-Campbell noticed two girls, aged 8 and 11, near the group.

"I stayed close, a few moderate waves then came through and of course all that water has to go somewhere… a flash rip began to take us all sideways. I asked the girls if they were okay."

The girls said they were fine but as they drifted outside of the flags, Gibbons-Campbell knew they were getting into dangerous territory.

"I asked again if they were okay and stressed that I had fins and was getting tired – if they need help the lifeguards can come and pick them up in the IRB."

The older of the two, who was slightly further out, said they were still fine.

"As I turned back out to sea I saw a huge set on the horizon and knew that we were in the bomb zone where the wave was going to break."

The 27-year-old told the frightened young girl who was closest to him that they needed to swim as hard as they could then dive deep.

"We dove under, the wave broke and sucked us back into the washing machine. As I came up I looked around and she was next to me, I raised my hand to signal the lifeguards, while checking she was okay."

They were far from safe though as an even bigger wave approached. 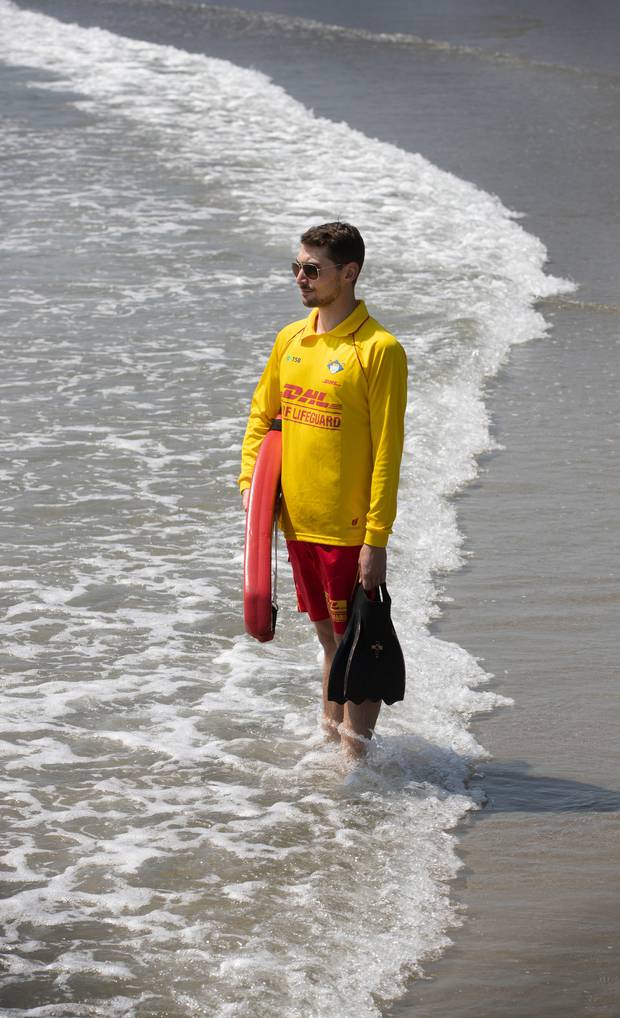 Chaz Gibbons-Campbell was recognised for his efforts in the rescue of a young girl in heavy surf. Photo / Alan Gibso

"We were even further into the boom zone now and this time I knew we had to dive deep and hold onto the bottom before pushing off and out through the whitewash – this is a hard swim with fins and this girl had none.

"We both took a deep breath and swam to the bottom - I was holding onto her armpits pushing her through the water."

By now lifeguards on the shore were rushing to help but the pair were still being pushed underwater and on one occasion he lost hold of her.

"I frantically began in the washing machine to try and feel where she had gone, I brushed past her foot and grabbed hold – anything was good at this point, I held on until it calmed down enough for me to push her to the surface."

As they surfaced the lifeguards appeared and plucked the girl to safety. Gibbons-Campbell then swam out to the older girl who was at least another 20m out, visibly upset and exhausted.

They were both picked up soon after by his colleagues who returned in the IRB. By this stage Gibbons-Campbell was "knackered" and suffering cramp in his leg.

Both girls were treated and headed back to their bach, later returning with their parents to thank the guards for saving them.

Gibbons-Campbell said the girls were unprepared for the conditions that day. He urged people to know their limits, stay between the flags and ask for help if they need it.

This article was originally published by the NZ Herald on December 28, 2019.