Defending champions, Mairangi Bay Delta, will be looking to hold on to their title for the third year running as they take on the 2018 Bay of Plenty Inflatable Rescue Boat (IRB) Long Hall stage race this weekend.

Back for the sixth year and set over five stages, crews will be required to tackle physically and mentally demanding challenges such as assembling and breaking down IRB equipment and performing rescues as they race along the Bay of Plenty coastline from Ohope Beach to Papamoa.

The 14 crews taking part will set off together from Ohope Beach at 10am and race side by side to Matata Beach where they will complete their first challenge.

Surf Life Saving New Zealand Eastern Region Sport Manager Mark Inglis says usually there will only be seconds separating the crews when they hit the beach to start their stage challenge.

Once complete, the crews will have 10 minutes to recover before the next mass start sets them on their way to the next stage challenge at Pukehina.

From there, they will carry on to Papamoa, Omanu Beach and back to Papamoa with racing taking around 2-3 hours in total.

Mr Inglis says the conditions are looking near perfect for some very fast racing, with no swell and very little wind forecast.

"This event is designed to test our Surf Lifeguards' ability to respond to an emergency situation which is why you can expect to see some fast, exhilarating racing," he says.

Last year's event saw the 12 teams finish within three minutes of each other and the previous year saw the first and second placed crews finish just two seconds apart.

The Open category will see two Mairangi Bay crews (Delta Squad and PapaDeltaHotel) along with Opotiki and Whakatane. 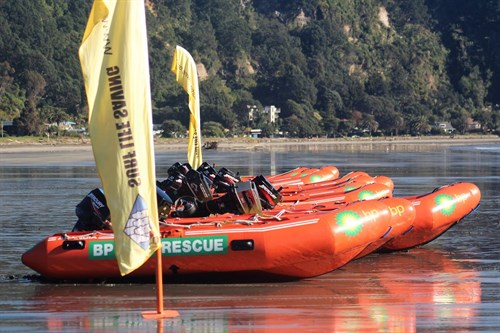