Surf Life Saving patrol flags come down on another summer

Surf Life Saving New Zealand is celebrating another successful summer of saving lives as the season officially comes to a close this long weekend.

Surf Life Saving New Zealand's Lifesaving and Education Manager Allan Mundy says it has been a hugely busy summer in comparison to last season which saw lifeguards operating in some challenging conditions.

"This summer, we experienced some amazing weather and warm water temperatures which brought huge crowds to our beaches around the country and to particular 'hot spots' like the Bay of Plenty and also Christchurch and Dunedin during their respective heat waves, he says.

"Great weather naturally increases the number of people flocking to beaches and therefore we're likely to see rescue numbers go up but one of the key factors to look at is the number of assists that have been carried out by lifeguards to prevent people from getting into a life threatening situation."

Surf Life Saving New Zealand records both 'rescues' which involves saving someone from a life-threatening situation, as well as 'assists' which involve removing swimmers from dangerous situations.

The Gisborne, Bay of Plenty and Coromandel coastline saw a consistent East Coast swell throughout most of the season with the odd cyclone-related swell which made for some challenging conditions for lifeguards including rips and holes constantly changing.

In stark contrast to last season, they had very high numbers of people using the water more frequently and, of those, a significant amount outside of patrol hours or outside of patrolled beaches.

A number of out-of-hours rescues and callouts also made for an early start to the patrol season for lifeguards in the South Island. The number of rescues were higher than previous years which was a reflection on the greater number of people being at the region's beaches.

Mr Mundy says lifeguards really stepped up to the challenges of a record summer that saw unusually high numbers of swimmers on our beaches each day coupled with larger than normal surf.

"They can all be proud of the fact that they have contributed to saving hundreds of lives," he says.

After what was a very positive start to the summer, the country saw six beach drownings in February and March, taking the number of drownings at unpatrolled beaches between Labour Weekend and mid-March to 11. While better compared to 17 at the same time last year, it is a rapid slide from just two at the end of December and five at the end of January.

Mr Mundy says one drowning is too many but one fact remains the same- swimming between the flags is always the safest place to swim.

"Considering the fantastic summer we've had, and the number of rescues and assists that have been carried out, it is pleasing to see that the number of drownings at unpatrolled beaches hasn't increased dramatically on last year."

Mr Mundy says with Easter falling slightly earlier this year and the weather still being quite settled, there is a risk of the recent spate of drownings continuing therefore people really need to stop and think carefully before they enter the water at an unpatrolled beach.

"We are asking people to take responsibility for their own safety and those around them. Learn to spot rips, assess the conditions and always swim with a friend. The surf is an unpredictable environment that can change very quickly. If you're not confident in your ability and don't know how to safely get yourself out of danger, then quite simply you should stay out," he says.

While the red and yellow flags will be put away until Labour Weekend, volunteer lifeguards will continue to be part of callout and search and rescue squads over the winter months as well as continuing with their training, upskilling and keeping their surf clubs running.

Mr Mundy says a massive thank you must go out to the 19,000 members and 5,000 lifeguards around the country that have worked tirelessly to keep beach-goers safe for another year. "Being a Surf Lifeguard is a big commitment and we're incredibly grateful to all of our volunteers."

Finalised patrol statistics for the 2017/18 season will be available in due course. 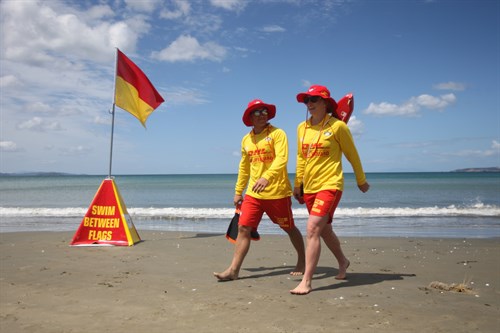