The penultimate day of the Under-14 New Zealand Surf Life Saving Championships, called Oceans 18, held this weekend in Orewa has seen Mt Maunganui Lifeguard Service narrowly edge out their nearest rivals by six points with only one day of action to go.

The lead has changed multiple times throughout the day but with another action-packed day to come tomorrow, the final 2018 champions are far from decided.

Mt Maunganui managed to put themselves in front by taking maximum points in events like the Under-13 mixed beach relay which they won today and say they're looking forward to tomorrow's challenges and maintaining their lead.

In second place was Lyall Bay Surf Life Saving Club on 40 points, who are vowing to fight back tomorrow for the overall win and with up to three points available for an individual win and five points for a team win, it is still a real possibility.

Local team, Orewa SLSC is currently holding ninth place but say they're honoured to be hosting this national event at their home beach and showing the rest of the country what they love about their town.

Oceans 18 event manager Scott Bicknell credits the local Orewa Surf Life Saving Club for being fantastic hosts, along with the wider community for their strong support.

"This event continues to throw a few challenges at us but again, the athletes are loving every minute of it and that's because Orewa have been fantastic hosts. Both the surf club and the local community have been awesome and we're really enjoying being here."

"Plus the racing has continued to be exciting. The teams are really fighting for every single point and that's showing in the close results all the way down the leader board. It's not just first and second fighting for positions, it's everyone. So from a racing perspective, it's just fantastic and makes for some exciting spectating." 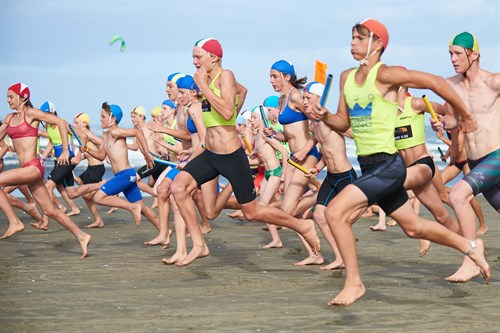