Mt Maunganui Lifeguard Service has taken the early lead after day one of the Under-14 New Zealand Surf Life Saving Championships, dubbed Oceans 18, held at Orewa Beach this weekend.

Whakatane Surf Life Saving Club finished the day in second, only two points behind their rivals, and with three days left to go, they're vowing to fight hard to take the lead themselves despite having half the number of athletes as Mt Maunganui.

Event manager Scott Bicknell said it was a challenging first day of the annual carnival but the feedback from athletes has been overwhelmingly positive.

"The weather made things tricky all day but despite that, everyone has really enjoyed themselves. The racing has been fantastic and everyone is really looking forward to tomorrow."

"It's also been great to see the lead change throughout the day, and that just shows how competitive Oceans 18 is. Tomorrow will be an interesting day for sure."

Oceans 18 continues tomorrow from 8.00am at Orewa Beach. Spectator entry to the event is free and with plenty of food and activity options available to the public, it could be a great day out for families around Auckland.

Athletes, their supporters and spectators are encouraged to join the conversation online with #Oceans18 and #SLSNZ. 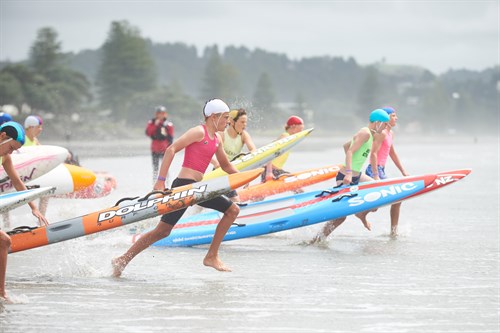