The SLSNZ New Zealand High Performance team has finished the first day of the 2018 Sanyo Cup in second place on 435 points, only 20 points behind Australia who end the day in first.

They also lead third-placed holders Japan by nearly 100 points, showing how well they performed throughout the day against some of the best.

A full report from the New Zealand team is below:

Day one dawned with dreary skies, a little drizzle and slightly more comfortable temperatures than we have experienced in the last couple of days which was a nice relief.

Despite the flat benign conditions that greeted the team, the racing was of a very high standard with all the teams adding to what has been a really fantastic day of Surf Sports action.

The New Zealand surf community can be very proud of what this young team achieved across the beach today. Each athlete put it all on the line for this team and they can all hold their head high knowing they have left nothing in the tank.

Stand out athlete today would have to be Louis Clark, who at the young age of 16, and representing New Zealand in an Open Surf team for the first time, obliterated a field of seasoned and very talented swimmers to end the day undefeated over all swim events.
To watch him swim away from highly talented athletes from other countries was simply a sight to behold and bodes well for Louis future in surf sports. To put it bluntly, Louis was an "absolute animal" in the water and impressed the entire beach with his ability to "smash" the field.

Another highlight saw the teams 'elder statesman' Murdoch Finch take out a hugely competitive and highly stressful (for the management anyway) Beach Flags competition. After many years toiling around the top of the highly competitive beach arena, this was Murdoch's first shot under a black cap and he certainly didn't disappoint.

Casie Fyall, who is celebrating her 21st birthday today, showed again why she is capable of mixing it with the very best in the world with a second in the flags, third in the sprint and anchoring the womens beach relay to a win.

Luther Maxwell was another at a young age to show some great skills on the water against some very high level competition - his swim leg in the ironman was particularly impressive to watch as he swam around some top competition to climb through the field.

Olivia Corrin was relentless all over the beach today showing the rest of the world she is an absolute world class athlete throughout the day, leaving absolutely nothing in the tank.

Claudia Kelly, in her second Sanyo Cup, again showed us she is how formidable she is on the international stage, and along with debutants Hannah Baker and Macy Burns, all competed to such a high level which is unexpected at such a young age.

Debutant Scott Cowdrey showed us what a phenomenal board paddler he is. Scott went stroke for stroke with his elite competition finishing a very close second in the board race and combining phenomenally with Captain Cory Taylor for the win in Board Rescue.

Cory, as expected, led from the front with some awesome performances, plus the inspiration and leadership he gave to the young team cannot be undervalued.

Coach Danny Morrison said: "I was really stoked with the effort the team put in today. June can be a weird time of the year to be racing at this level, but the team put their foot on the line and gave it everything they had, and we couldn't ask for more.

"We have room for improvement across the whole beach, so I am really excited to see these guys nail a couple more '1-Percenters' that will make a huge difference tomorrow." 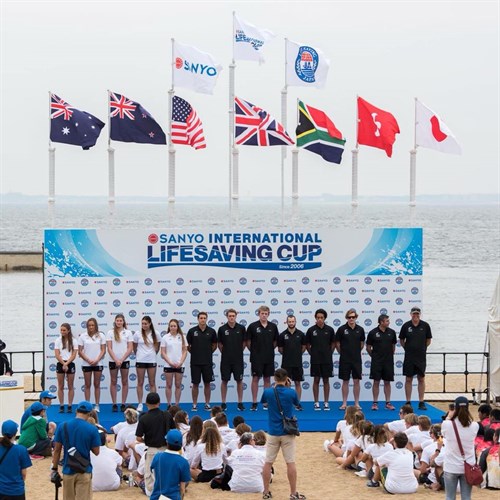