The New Zealand Surf Life Saving High Performance team has finished an impressive second at the annual Sanyo Cup in Japan, after two days of intense competition against some of the world's best surf athletes at Momochi Beach in Fukuoka.

After finishing 20 points behind main rivals Australia on the first day, the New Zealand team pushed back on day two to finish a mere eight points behind their rivals, meaning they finished the overall event in second and challenged the strong Australian team.

The second day of Sanyo Cup was different to the first, with hot weather and a commitment from the New Zealand team to push themselves to the limit, which spectators say they did.

New Zealand Coach, Danny Morrison, said every athlete did the country proud after giving it "everything they had".

"We are very proud of our team as they gave it absolutely everything on the beach and left nothing in the tank. They all took on the challenge of improving on their day one performance and I'm stoked to say they delivered on that promise."

"They took on some of the best surf athletes in the world and to deliver the results that they did, is very pleasing. We couldn't be happier with their performance."

Macy Burns (Lyall Bay) showed she will be a force to be reckoned with when the Lifesaving World Championships roll round for the Junior Black Fins in Adelaide. Despite her raw experience and nerves around competing against some of the world's best surf athletes, she stood up and made her mark over the day.

Louis Clark (Taylors Mistake) backed up his unbeaten day one races with further standout performances throughout the day. In three of his four races on day two, Louis remained unbeaten and performed well beyond his years.

Beach specialists Casie Fyall (Waikanae) and Murdoch Finch (Omanu) put in their usual hard work in the arenas where often a nano-second can be the difference between first and last place. They both toiled hard in some really tough racing with excellent results.

Luther Maxwell (Lyall Bay), Claudia Kelly (East End) and Hannah Baker (East End) competed today well above their young years against some much more experienced seasoned athletes, going stroke for stroke and achieving a string of impressive results. Luther's ability through the water in his swims, Hannah's powerful displays on the surf-ski and Claudia's strengths across all disciplines were a real credit to them all.

Captain Cory Taylor (Midway) continued to lead from the front as he pushed himself through race after race with his results truly displaying his world class skills across the beach. His leadership, direction and inspiration across the beach drove this team to many of their successes throughout the day.

However, the team have said the two stand our performances came from Scott Cowdrey (Papamoa), who was "phenomenal" on the board, and Olivia Corrin (Midway) for her "gutsy" performance. Scott claimed a win in the board rescue with Cory [Taylor] and then backed it up with a convincing win in the board race which supporters say was "simply awesome to watch".

Meanwhile, Olivia Corrin swam to a very close second in the surf race and then won the notoriously difficult Ironwoman race which the team says is "outstanding". "The drive to take the Ironwoman race was particularly inspirational and is a true credit to Olivia's guts and determination to win the race despite a field of world-class athletes," they said.

"Thank you to the entire team for their hard work and dedication at the Sanyo Cup. A special thank you has to go to Danny Morrison, Jack Gavin and Steve Vaughan for their unwavering support of this team, and leading them to second overall."

The team now returns to New Zealand where they'll no doubt keep training for the next big event. 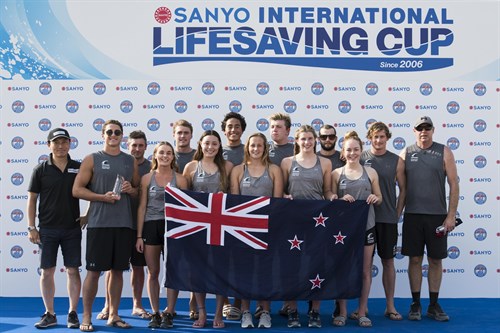 Photo thanks to: Lester Kelly