One of the biggest sporting events on the Surf Life Saving New Zealand (SLSNZ) calendar, the annual Eastern Region Championships (ERCs), is taking place this weekend at Mt Maunganui with hundreds of athletes from around the country set to take part.

This year, 850 athletes will compete in the surf and on the sand near the Mt Maunganui Surf Life Saving Club, from Friday evening with the popular twilight session, before continuing on Saturday and Sunday.

The largest team to compete at the 2018 ERCs is Red Beach Surf Life Saving Club with a total of 88 athletes, followed closely by the local team from Mt Maunganui Lifeguard Service with 75 athletes.

Joining them, and fresh off their dominant performances at the Central Regional Championships, are New Plymouth teams Fitzroy and East End Surf Life Saving clubs with 27 and 25 athletes respectively.

Although a total of 34 teams from all around the country, including from as far away as Dunedin with St Clair Surf Life Saving Club, are travelling to the annual carnival which has over 15 different events (or races).

SLSNZ Eastern Region Sport Manager Mark Inglis says this event is shaping up to be one of the most competitive this season due to the large number of athletes, along with their sheer skill.

"To have over 800 athletes from around New Zealand, including a lot of our New Zealand competitors who compete overseas, competing here in Tauranga is simply fantastic. Year on year, this event is one of the largest on the calendar and we're proud to be continuing that tradition, especially with the added bonus of the New Zealand Representative Challenge."

Monday sees the country's top SLSNZ athletes return to the beach at Mt Maunganui for the 2018 New Zealand Representative Challenge, held immediately after the ERC event.

"Having the [New Zealand] Rep Challenge on Monday just adds a whole new level of excitement to the ERC events. The Rep Challenge brings out some of New Zealand's best athletes and having them compete alongside the athletes at the ERCs in preparation for the event on Monday, means it will create a lot of close racing during the weekend," said Mr Inglis.

Athletes from the New Zealand Open, Development and Youth teams will be in attendance, to fight for both ERC titles, and top honours at the New Zealand Representative Challenge. 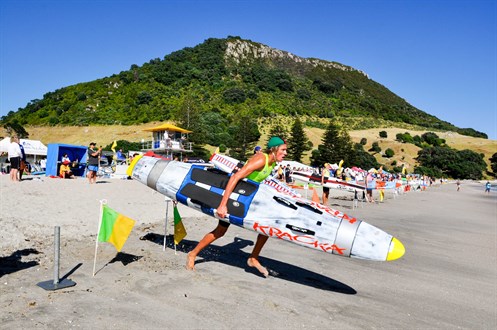