Bay of Plenty has won the New Zealand Representative Challenge (NZRC) by the slimmest margin with 242.5 points, while competing against six other regions at Mt Maunganui today, taking first in both the open and youth divisions.

In the open category, the Bay of Plenty team narrowly beat their biggest rivals from Northern Region [Auckland and surrounding area] who finished second, by a mere 1.5 points during the one-day competition held in demanding conditions with the heat and swell providing the biggest challenges.

Athletes in the Bay of Plenty team enjoyed wins in various events including the beach flags, board race, rescue tube, short course canoe and IRB single rescue events to edge out their rivals going into the final two races.

Finishing in third was Gisborne, while Taranaki and Capital Coast [Wellington and surrounding area] rounded out the top five on 176 points and 143.5 points respectively.

Held directly after the Eastern Regional Championships (ERC), which was dominated by three Bay of Plenty teams, the NZRC attracted almost 300 athletes split between open and youth categories going head-to-head against competitors from other regions around New Zealand, sparking more friendly rivalry between districts.

Bay of Plenty also won the youth division with 211 points ahead of Northern Region and Taranaki in second and third. The youth category attracted 145 athletes from around the country who are aged from 14 to 19 years old.

With the TSB Surf Life Saving Championships, often referred to as 'Nationals' coming up in March and the World Championships in Adelaide later this year, the athletes were determined to also show off their skills to secure places in the New Zealand team.

NZRC Event Manager Scott Bicknell said the day couldn't have gone any better despite a few "spills and thrills".

"The event has been a huge success. The surf conditions were a little challenging at times so that provided some exciting spectating with the occasional mistake, but they [athletes] all handled it very well and clearly enjoyed it.

"Most of the races were incredibly close and came down to the wire, plus the unique Mt Maunganui beach and shore-break provided a little extra test for the athletes. All in all, it showed how talented the athletes are and why they are amongst some of the best out there."

Mr Bicknell also thanked the locals for welcoming the event to their shores and allowing athletes from around the country to see what makes this region so good for surf lifesaving events. 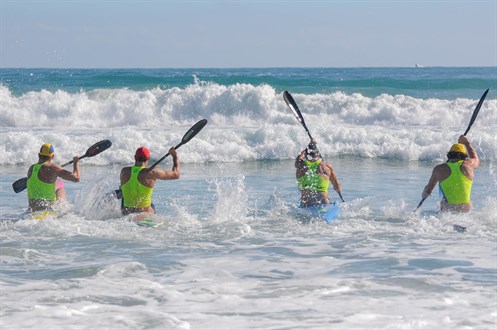