A strong contingent of 10 crews saw reigning champions Sunset Beach continue their dominance of the BP North Island IRB Championships at Waipu Cove over the weekend.

The Port Waikato club have been dominant in the sport over the past three seasons, including last year's event at Oakura Beach and the previous year at Waipu Cove.

While the weather presented athletes with some challenging racing conditions, including a hard chop mixed with a residual swell from earlier in the week, the 42 crews from 15 clubs (including two from the South Island) showed their experience in manoeuvring the waves.

Event manager Johnny Clough says Sunset Beach were the favourites heading into the event having dominated IRB racing in past seasons under the leadership of Shane Edwards who has been instrumental in developing a successful programme both at club and regional level.

"This was further demonstrated by the Sunset Beach Open Women's crew of Taylor Shrimpton and Jemima Ferrier with a clean sweep of their division, coming away with four gold medals."

Mr Clough says it was also pleasing to see the spread of depth and experience in the new age divisions of Under 19 and Under 22 Men's, with good showings from the East End, Waipu Cove, Mairangi Bay youngsters.

"These crews raced well in the challenging conditions and showed that they were prepared to trade speed for common-sense and safe driving to emulate the Open crews, he says.

"It's been an exciting start to the competitive season for IRB racing; one that has seen the introduction of rule adjustments, new safety compliances and age divisions applied to the sport. Also, a move toward an international pathway with opportunities to represent New Zealand at the World Championships in Adelaide later his year." 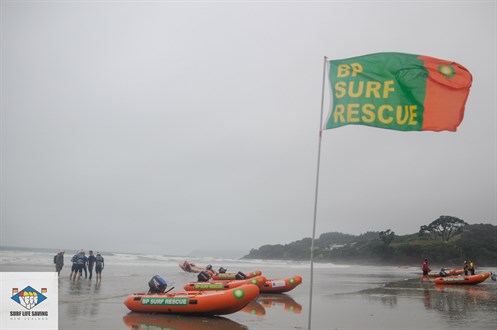