The fifteenth annual New Zealand Pool Championships is not only set to be the biggest ever; it has just been sanctioned by the International Lifesaving Federation.

Surf Life Saving New Zealand Sport Manager Mike Lord says this is fantastic news for the event which has continued to grow year-on-year.

"It means that if any World Records are broken this year, they will be recognised by the ILS which makes the achievement even greater for our athletes," he says.

The New Zealand Pool Championships is the first national event for the 2017/18 surf lifesaving season and has drawn entries from 687 athletes- an increase of 70 on last year.

A total of 31 clubs are taking part with the largest number of entrants from Mairangi Bay Surf Life Saving Club (77) followed by Orewa Beach (72) and Wellington's Lyall Bay (63). Coming from the furthest South is 14 athletes from Dunedin.

There will be around 400 races contested across age groups from 10 years through to Masters (over 30). Events include rescue medleys, line throws, swimming with fins while carrying a rescue tube and 'rescuing' a manikin off the bottom of the pool.

Mr Lord says the event is always a drawcard because of its uniqueness.

"Unlike being out in the surf, competitors can watch the action more closely and clubs can compete together and cheer each other on in a stadium-like environment, he says.

"Many of our members spend the cooler winter months training for surf-based rescues in a more controlled environment and this is a great way to demonstrate where they're at ahead of the new summer patrol season."

Racing begins at 9am on Friday October 13 at the Sir Owen G. Glenn National Aquatic Centre (AUT Millennium) in Albany with the Junior (Under 11-14) events and continues with a full day of racing on Saturday for the Under 16, Under 19, Open and Masters, concluding around 3pm on Sunday.

50m Rescue Medley:
The competitor swims 50m freestyle to turn, dive, and swim underwater to a submerged manikin. The competitor surfaces the manikin within the 5m pick-up line, and then carries it the remaining distance to the finish edge of the pool.

100m Tube Swim with Patient and Fins:
The competitor swims 50m freestyle with fins and rescue tube. After touching the turn wall, and within the 5m pick-up zone, the competitor fixes the rescue tube correctly around their patient who is waiting with one hand on the end of the pool and tows them to the finish.

50m Brick Carry without Fins:
The competitor swims 25m (U13/U14yrs only) or 35m (U11/U12yrs only) freestyle to turn, dive, and recovers a submerged rubber brick. The competitor surfaces the brick within the 5m pick-up line and then carries it the remaining distance to touch the finish wall.

Line Throw:
In this timed event, the competitor throws an unweighted line to a fellow team member located 12.5m in the water and pulls this "victim" back to the poolside.

100m Rescue Medley:
The competitor swims 50m freestyle to turn, dive, and swim underwater to a submerged manikin located at 17.5m distance. The competitor surfaces the manikin within the 5m pick-up line, and then carries it the remaining distance to the finish edge of the pool.

100m Manikin Tow with Fins:
The competitor swims 50m freestyle with fins and rescue tube. After touching the turning edge, the competitor fixes the rescue tube around a manikin floating at the surface at the edge and tows it to the finish.

100m Manikin Carry with Fins:
The competitor swims 50m freestyle wearing fins and then recovers a submerged manikin to the surface within 10m of the turn wall. The competitor carries the manikin to touch the finish wall of the pool. 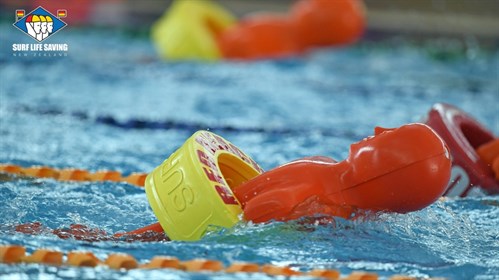