The reality of competing on a home beach for the first time in six years has the New Zealand Black Fins even more fired up to put on a top performance.

New Zealand's surf lifesaving team came together over the weekend for their first team camp ahead of the DHL International Surf Rescue Challenge which will take place across three tests at Mount Maunganui later this year.

Black Fins coach Jason Pocock says the camp was a great chance for everyone to get together and gel as a team.

"We have a really exciting team with some established and experienced Black Fins as well as some new, enthusiastic members and it was great getting them all together, he says.

"One of the highlights of the weekend was having 2015 Black Fin's captain Paul Cracroft-Wilson attend and pass on Tangaroa, our leadership symbol, to Max Beattie who was very humbled. It is going to be great to watch Max continue to grow his fantastic leadership skills and he will fire the team up with his actions and his hugely passionate approach to racing."

After a weekend full of training, goal setting and team building activities, the team is confident that they have a clear understanding of what they want to do as individuals and how that will impact and support the team.

"With less than 60 days now until the first test, our planning will ramp up to ensure the 2017 Black Fins have the best opportunity to perform at their peak," he says.

"While the coaches are focused on the athletes, I see the time as crucial for the development of the team management. We have a very important role around ensuring the environment is the best it can be for our athletes to be perform," he says.

The International Surf Rescue Challenge is a beach-based competition that takes place every second year and Surf Life Saving New Zealand is proud to be hosting the event for the first time since 2011.

Along with the New Zealand Black Fins and Junior Black Fins will be teams from the United States, United Kingdom, South Africa, Canada, Australia and Japan.

Mr Weatherall says they're looking forward to the opportunity to compete for New Zealand in front of the New Zealand public. As many international surf lifesaving competitions are held overseas, there is rarely an opportunity for them to engage with the local community.

The team is currently working on a number of initiatives which they believe will create an opportunity for the team to engage with the wider community. 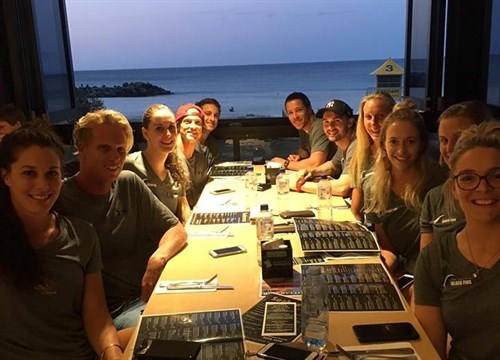