Having the opportunity to see the Black Fins compete on a home beach for the first time since being crowned world champions has the lifesaving community buzzing.

The team first took the title off the Australians at the 2012 Lifesaving World Championships in Adelaide and held on to the title for the next two consecutive world champs in France and The Netherlands.

A New Zealand lifesaving team hasn't competed in New Zealand since 2011 and next week's DHL International Surf Rescue Challenge at Mount Maunganui is a rare opportunity for New Zealand to witness their athletes in action.

Competing alongside the Black Fins will be the New Zealand Youth team, known as the Junior Black Fins.

Both teams will compete in a three test series on Thursday November 30, Saturday December 2 and Sunday December 3 with an overall point score determining the Open and Youth champions.

The teams will gather in Mount Maunganui on Sunday and spend the days leading up to the competition in a number of training and team building sessions as well as getting out into the local community, visiting local surf clubs and schools.

Black Fins team manager Mark Weatherall says they are really excited and looking forward to getting to Mount Maunganui.

The team will be attending the Omanu Junior Surf Carnival on Sunday afternoon which will allow the athletes to mix and mingle with local lifeguards, members and up-and-coming athletes.

People will have the opportunity to see the teams in action as they will train each morning at the Main Beach in Mount Maunganui and they also have scheduled training sessions from 4-5.30pm at Omanu Beach on Monday, Papamoa on Tuesday and Mount Maunganui on Wednesday.

A number of athletes will also head back to their old primary and high schools in the area to meet with students and talk about their surf lifesaving career.

Mr Weatherall says spending the days leading up to the event in Mount Maunganui is a great opportunity to promote the Black Fins brand across the community and catch up with so many of the people that have supported them over the years.

"It's wonderful to have the opportunity to compete in front of them on a home beach when so often we are racing overseas and in a different time zone," he says.

Junior Black Fins team manager Shane Smith says the team is looking forward to gathering this weekend and training together as a group, continuing to build on their strong team culture.

"The athletes are really excited about the upcoming competition and measuring themselves against what we expect to be some very tough competition. Also, it is not often that these athletes get the opportunity to represent their country at home in front of a home crowd, family and friends which will just add to the occasion."

Racing begins at 8.30am on Thursday November 30.

Click here for more information about the event and join the Facebook event page for the latest event news and updates. 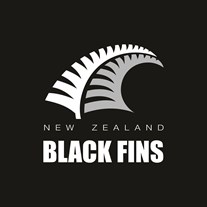