Australia has taken a small lead after the first day of competition at the three-day DHL International Surf Rescue Challenge held this week in Mt Maunganui, that sees seven countries from around the world go head to head in surf lifesaving events.

However, their lead is very slim with New Zealand chasing them down to sit six points behind in the open category and seven points in the youth category.

The New Zealand team, dubbed the Black Fins, are the current world surf lifesaving champions so are batting for pride as they pledge to work harder for the win at this international event meaning the fight is set to intensify further over the coming days.

However, there is another close battle emerging further down the leader board for third between the United States of America and South Africa separated by a mere two points in the open division. While the USA currently leads this battle, the South Africans are vowing to push for the spot later in the week.

Rounding out the open category top five is Japan, who is followed closely by Great Britain and Canada.

The youth category, with athletes aged under 19 years old, is just as close with South Africa sitting in third behind Australia and New Zealand making it a southern hemisphere lock out. Great Britain is close behind in fourth, while the USA rounds out the top five.

"It is great to see the international rivalry here today but also the support between the teams. Every single athlete is pushing the limit and it is making for some of the best racing we've seen," he said.

"Plus the conditions have been perfect. There has been a decent swell all day and we've seen athletes ride on waves from about 100 meters off shore which just makes for incredible racing. A lot of the races were extremely close which is also a credit to the fitness and skill of all of these athletes."

Tomorrow the athletes from each country take a short break from racing and will visit schools in the area to promote water safety and getting into surf lifesaving as a professional and leisure sport.

The DHL International Surf Rescue Challenge continues on Saturday from 8.30am at the Mt Maunganui beach in Tauranga. Spectators can watch the action for free and cheer on their favourite country. 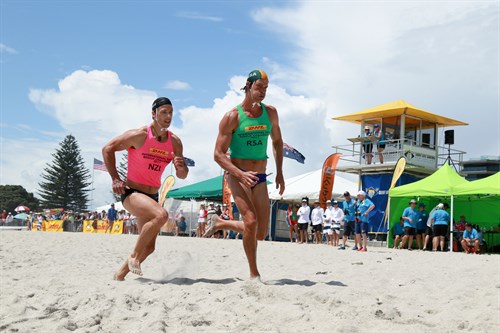