Every year, regional Awards of Excellence ceremonies are held around the country to officially recognise members for their hard work and dedication to Surf Life Saving in New Zealand.

One of the night's top awards, Surf Lifeguard of the Year, was awarded to Chris Haig from St Clair. The purpose of this award is to recognise a member who has made an outstanding contribution to the delivery and development of drowning prevention services for Surf Life Saving.

Chris received the highest volunteer patrol hours for St Clair this season with a total of 65 hours, all of which were while being the Patrol Captain on the day.

Additionally, he delivered all of the Surf Lifeguard Award training, helping 22 new members gain their Lifeguard Award, assisted with IRB crew and driver training, supported 17 members through various First Aid qualifications, was a member of the Local Lifeguard Committee and ensured all 96 members were refreshed for the 2016/17 season within the club.

Sam Clutterbuck, Club Support Officer for the Otago-Southland area, says Chris is always professional during patrol and is a leader to the new members coming through.

"He is constantly informing his membership of what courses are available and is always willing to lend a hand," he says.

Volunteer of the Year was awarded to James Coombes, also from St Clair. The purpose of this award is to recognise an outstanding member who has made a significant volunteer contribution to enhancing surf lifesaving within their local area during the patrol season.

Mr Clutterbuck says James epitomises what Surf Life Saving is all about and is a very dedicated member in the Otago-Southland region. He has patrolled over 30 hours this season and has acted as a leader, coach, a local chairman, course facilitator and member of the Search and Rescue team.

"He spends a lot of time voluntarily steering his club through season after season, whether it's filtering through club emails, monitoring social media, creating weekly newsletters, completing funding applications or organising team trips. He is the backbone for his club and has his finger on the pulse in several areas. He continues to put so much in to his club and ensures each area has the right people and training there to ensure it has every chance to succeed," he says.

Chris and James will go on to be finalists in the national Surf Life Saving New Zealand Awards of Excellence, being held in Auckland in September.

St Clair also claimed the prestigious Club of the Year award. The award considers a number of aspects including the number of refreshed lifeguards and Senior Lifeguard Awards gained, membership development, patrol audits, sport and lifesaving results and membership growth.

Mr Clutterbuck says the awards are an important way to end a busy season.

"The night was a great opportunity to congratulate and celebrate the time and energy that our members have given to the region over the 2016/17 season," he says.

Club of the Year
St Clair

Plaque: "To recognise the huge efforts put in to planning, mentoring current officials and delivering Sporting events throughout the region this season."
Awarded to: Dennis Trembath 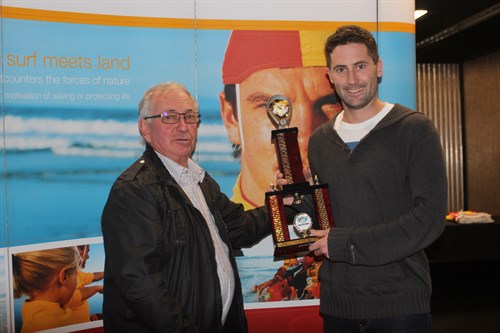 Volunteer of the Year James Coombes accepts Club of the Year on behalf of St Clair Surf Life Saving Club.