The 21 year-old, who is now based on the Gold Coast, has a good understanding of the event, having represented New Zealand at last year's Sanyo Cup where she took gold in the Ironwoman along with a bronze in the Women's Ski. She also raced in Japan at the 2013 International Surf Rescue Challenge.

The Sanyo Cup is an annual beach competition hosted by the Japan Lifesaving Association and this year it will be held at the Momochihama Seaside Park in Fukuoka from June 24-25.

This year, Jess will be racing alongside her brother Hamish who has his own experience leading a New Zealand side. He captained the Junior Black Fins at the 2016 Lifesaving World Championships in The Netherlands.

Alongside Jess and Hamish Miller in the team of 10 (five male and five female) is their second cousin Casie Fyall, who also represented New Zealand at last year's Sanyo Cup, 2016 Junior Black Fins Libby Bradley and Javon McCallum and Bayden Botha who was part of the New Zealand Youth team for the 2015 International Surf Rescue Challenge. Ben Johnston, who has just been called up to the team, also has Sanyo Cup experience under his belt, having represented New Zealand at the 2015 event.

The team also includes some newcomers to the High Performance programme; Claudia Kelly, Samalulu Clifton and Atakura Julian, who is also a new addition to the team.

Coach Danny Morrison says he and Team Manager Steve Vaughan couldn't be happier to have Jess lead this year's team.

"In looking at the final team, we have a great mix of talented young athletes and some athletes with a fair bit of experience in international competition and the High Performance environment, he says.

"Jess stood out as someone who has really taken control of her own destiny in the sport and is very driven to make the step up to the next level of international competition. Being her third trip to Japan, and having completely dominated the Ironwoman in the 2016 event, the selectors and management team are very confident that she can provide some real value to the team on and off the beach. She has a great surf head on her shoulders and has shown a level of maturity that will help her make the most of this role."

Jess says she's honoured to be selected as captain and to have the opportunity to lead and race with a talented bunch of athletes on an international stage.

"I can't wait to step up to the challenge and be the person that my team mates can come to," she says.

As she's raced twice before in Japan, she's looking forward to sharing her knowledge about racing conditions and the culture with her team mates.

"That will be awesome to share with the newbies but the thing I'm most looking forward to is the friendly, yet very competitive, competition between all of the nations. Last year the racing was tough and it was awesome to see the Japanese really putting their foot in the door."

Her advice for her team will be to be prepared, give it their all through every race and focus on the little things, like starts and finishes, as the beaches there are very flat.

"Also, have fun and make friends with the athletes from other countries as that makes the trip even better. Be prepared to experience and embrace the Japanese culture as it's a trip you won't forget if you really get into it," she says.

Jess believes the team is strong and determined enough to take out the overall competition and really give the Aussies a nudge.

Personally, her goal is to win the Ironwoman on both days, like she did at last year's Sanyo Cup.

"I'm really excited to see what everyone can achieve over there and I can't wait to lead the team to success with Danny and Steve, she says.

"It will also be a cool experience to be able to race with my brother Hamish and second cousin Casie in a New Zealand team!"

The two days of racing will include events such as Surf Race, Board Race, Oceanman/Woman, Beach Flags, Beach Sprint, Board Rescue Tube Rescue, Oceanwoman Relay and Beach Relay.

*Atakura and Ben have been called in to replace Mount Maunganui's Lincoln Waide and Olivier Puddick who are now unavailable. 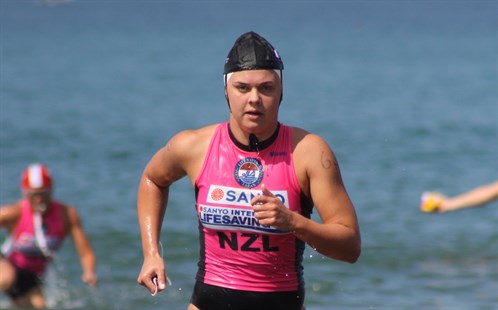