Teams from the Bay of Plenty have continued their dominance of the leaderboard at the third day of the annual Oceans '17 event, held this weekend in Mt Maunganui.

The local team from Mt Maunganui Lifeguard Service has maintained their lead from yesterday, while their neighbours from Omanu Surf Life Saving Club have moved up to second equal with team from Waihi Beach Lifeguard Services Inc heading into the final day of action tomorrow.

Red Beach Surf Life Saving Club finishes the day in sixth and is the top placed team from outside the Eastern Region, which covers beaches from Waihi Beach to Gisborne.

With almost 900 athletes under 14 years old taking part this weekend, event manager Scott Bicknell said he continues to be impressed by the athletes' skill and attitude at the event.

"All of the athletes are doing an amazing job out there. They are all giving it 100 percent and it's great for us as organisers to see how much they are enjoying the competition and supporting each other."

"It's also still very close for the top spots so I'm sure they [athletes] will be fighting hard tomorrow. Most of the finals are on tomorrow which could be a game-changer for many of our teams, so it's sure to be interesting to see how they go."

Tomorrow's events include the Grand Cameron race which consists of four athletes; one swimmer, one board paddler and two runners and is one of the biggest races on the event schedule. The surf race, board race and diamond race finals are also all due to be held tomorrow with dozens of points up for grabs.

The final day of the 2017 Oceans event gets underway tomorrow from 8.00am at Mt Maunganui. Spectators are welcome and spectator entry to the event is free with plenty of food, beverage and sport retailers on site. 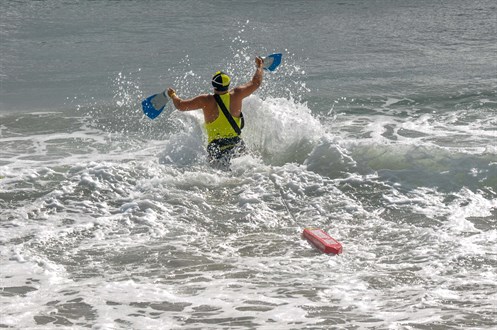