The New Zealand team is in a great space as they take on their final day of preparation before racing at this weekend's Sanyo Cup.

Yesterday morning, the team split up for sessions in the pool with manager Steve Vaughan and at the beach with coach Danny Morrison.

Mr Vaughan says the conditions are as they expected.

"It's been really quite warm. We did a pool session this morning and it was incredibly hot even in the pool. The guys, after each of their sets, were getting out to have a cold shower to cool down, it was that hot within the pool and the ambient temperature around the pool so that was unusual," he says.

The beach is also as they expected; flat as pancake, he says.

"We don't expect there to be any surf at all. I don't imagine that they get much surf at this particular beach at any time of the year. It's flat and a man-made beach so it's going to be good hard core racing for all of the teams involved out there," he says.

Yesterday afternoon saw the team back at the beach for another session to familiarise themselves with the beach conditions and what they can expect over the weekend. Mr Vaughan says they went over some typical race preparation to have them focussed and ready to go on the weekend.

Today, the team will take on another two sessions and take part in the Opening Ceremony, following which coach Danny Morrison will attend the craft auction.

Mr Vaughan says the auction is a unique part of the Sanyo Cup.

"We haven't brought any equipment with us in terms of skis and boards and we essentially bid at a non-cost auction to paddle a particular piece of craft for each of our athletes, he says.

"It's quite unique, it's quite exciting and adds a bit of difference to other carnivals we would normally go to."

Racing begins from 10am tomorrow (1pm NZ time) and continues through to Sunday.

Mr Vaughan says they are all proud to be racing under the black cap.

"It's very important to this team and for each of the individuals; they have all voiced that they are part of the legacy of the black cap and racing for the New Zealand surf lifesaving team so they're all very excited, very clued in that they want to represent, and represent well, themselves, the management team, Surf Life Saving New Zealand and all of their supporters back home in New Zealand. Although they're not getting overawed by it they're keen to continue that legacy," he says.

To follow the results visit http://sanyo-lifesavingcup.com/schedule and to keep up with the team's journey, visit www.facebook.com/slsnzhp 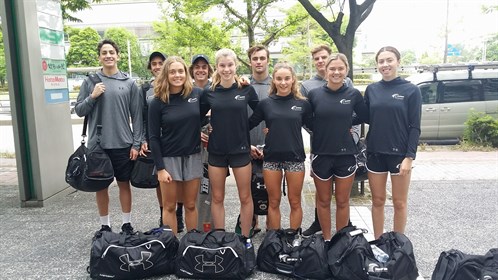