The work is done; the team is prepared and they're ready to take on this year's Sanyo Cup in Japan.

Team manager Steve Vaughan says they had a fantastic day yesterday to cap of their final preparations.

After breakfast they had a solid final hit out, familiarising themselves with the equipment and conditions around the high tide, so the athletes know what to expect at competition time.

The Team Manager's meeting was also held to run through the weekend's events and provide clarity around what to expect and try to minimise any interruption that can occur with the language barrier, he says.

That was followed by the equipment "auction" where he says coach Danny Morrison performed strongly, with a higher than average level of success in attaining the correct piece of equipment for each athlete in each of their races.

"It was long, and sometimes complicated, but a very fair way to give this competition the uniqueness it has, he says.

"Now the athletes simply need to get on and make best with the equipment we have been allocated."

Later in the afternoon, the team was welcomed to the competition in the formal opening ceremony on the beach. Each team was introduced, and there were many speeches including JLS President Takuya Iritani and the local government minister. ILS President Graeme Ford was also welcomed as an observer to the event.

"Captain of Japan, Shun undertook the oath on behalf of the competitors as did the chief judge on behalf of the officials - both proclaiming to share in a fun, competitive, honest competition, a little of which was lost in translation," he says.

Many of the athletes in the team are representing New Zealand for the first time and Mr Vaughan says they took an opportunity to have some quiet time and celebrate receiving their cap.

"It is not lost on this group, the importance of the legacy the black cap holds, and I can say with a huge level of assuredness, they have taken it on board fully, know they have a job to do, the pride to uphold, and are simply fizzing to get out there and do the country proud," he says.

Finally, last night, the team celebrated with friends and family who have made it over to Japan to support the team, spending their evening meal together down on the water's edge at a local restaurant.

"We thank them for being here to share in these athletes' experiences and competition and the team will be going all out tomorrow to make them proud too," he says. 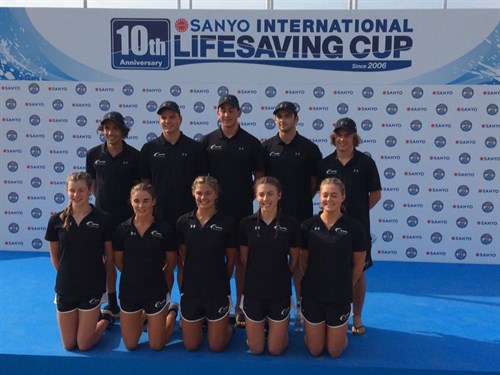