Kiwis leave nothing in the tank at Sanyo Cup

The Kiwis left nothing in the tank yesterday, making their mark on the first day of the Sanyo Bussan International Lifesaving Cup in Fukuoka Japan.

The day starting under dreary skies and continued to deteriorate throughout the day but the team coped well and adapted to the conditions.

Samalulu Clifton added to the gold tally taking out the Women's Ski Race title and the boys added another in the Men's Tube Rescue.

Coach Danny Morrison says the goal for every athlete is to win races but this tour is more than just racing.

"It is also about exposing some younger athletes to international competition at the highest level. We saw a number of athletes really stand up and put everything they had into their races. Some were rewarded with outstanding results, while others found out that this type of racing is a significant step up and there is much less room for error compared to their usual domestic competition."

Danny says the goal was fight for every position and execute their preparation and race plans as best as they can and he's proud to say that every athlete that wore a black cap emptied the tank for their team mates, their country, and themselves.

Watching Samalulu Clifton dominate the Women's Ski Race in her first ever international ski race, Casie Fyall win the Sprint/Flags double and Atakura Julian and Hamish Miller storm home to win the Tube Rescue were obvious highlights given their awesome victories, he says.

"But for me, equally important was watching a 15 year-old girl from Taranaki (Claudia Kelly) go stroke for stroke with a Nutri-Grain Ironwoman and almost take her out. It was watching Javon McCallum fight and scrap with a guy twice his size to stay in the flags final and it was watching Libby Bradley overcome the pain of swimming into a Jellyfish, and giving everything she had left for the team in her Taplin swim. Those are just some of the moments that made me proud to be a part of this team and there were many more.

"Everyone in the team has something they can improve on for Day 2 and they are fizzing at the chance to get another shot at some top notch international competition. Heads up - we're coming in hot!"

"The competition was magnificent throughout the day. It is fantastic to see the continuing development of countries who have been less successful in the past, he says.

"There were standout performance all over the beach from all participating nations and the Kiwis did not disappoint. Our young team showed some real grit and determination, took some big steps against some classy international competition and have set themselves up for some great racing on Day Two."

The team heads into the second and final day of racing at Momochi Beach in Fukuoka at 1pm New Zealand time, sitting in third place with 349 points behind Australia (429) and Japan (355).

There are seven nations taking part in the 10th anniversary of the annual two-day beach competition, hosted by the japan Lifesaving Association. 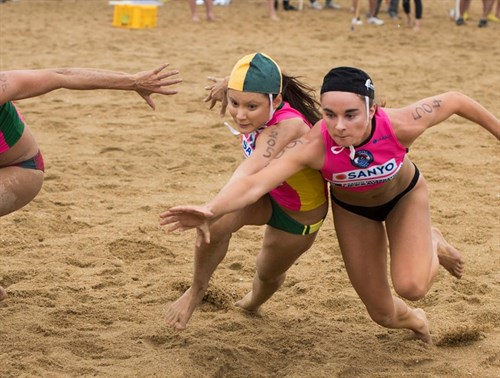