Kiwis push themselves to limit to claim Sanyo Cup bronze

They pushed themselves to the limit but some dominating performances from the Australian and Japanese surf lifesaving teams saw the Kiwis finish in a credible third at the 10th annual Sanyo Bussan International Lifesaving Cup in Japan over the weekend.

Australia finished on 854 points to comfortably win the title for the tenth consecutive year with hosts Japan in second with 711 and the Kiwis close behind on 703 points.

Day Two of the competition wasn't short of highlights with the team of 10 picking up two gold, seven silver and four bronze medals.

Casie Fyall managed to double up her Women's Beach Sprint gold from Day 1 and along with team mates Samalulu Clifton, Libby Bradley and Claudia Kelly took another gold in the Women's Beach Relay.

The event was the first time a number of the team members had worn the New Zealand cap and coach Danny Morrison says he couldn't be more proud of all of the athletes.

"Yes we came up a bit shorter than we would have liked on the points table, and yes we made some mistakes over the two days that ultimately cost us second place this time around, but after day one of racing, the group came together and made a commitment to 'spend every penny' we had in every race, he says.

"The end result was that we saw them literally collapsing on the ground at the end of their race, unable to pick up the gear they had just paddled. They had given their team everything they had, and for that reason, we could not ask for more. On this occasion, other athletes were better on the day and we must applaud the other teams for the way they fought for their results."

Danny says the Australian team was outstanding and very much deserved their overall win, but there were a number of races where the Kiwis challenged them and pushed them to their limits.

"To finish the weekend with two Taplin races, that literally came down to sprint finishes, was especially pleasing. The team came off the beach with their heads held high and a smile on their face, but knowing that next time around, everyone in the group will be better off for the experience at this level."

Team manager Steve Vaughan says New Zealand can be proud of what this very young team has achieved over the two days of competition.

There have been extreme highs and low lows, but overall, the commitment and desire to do the black cap proud shone through right until the final race, he says.

"Yes, we are disappointed in finishing third. Every New Zealand team that competes, competes to win. That is the essence of being a 'sports human' and being a Kiwi. But this team, selected with an eye to the future, showed plenty of heart, plenty of guts and plenty of drive to succeed," he says.

Steve says the eight competing nations competed well above expectation with the Kiwis fighting for every point.

"Our NZ team punched well; they got out there and left nothing in the tank, he says.

"It has been a privilege to watch and support this bunch of kids give it their all for themselves, the cap and the people back home."

Today, the athletes move forward with another unique part of the competition which sees them spending the morning in a cultural exchange with 150 10 and 11 year-olds at the beach, guiding them through what they do and what they love about surf lifesaving.

Later this afternoon, they will attend the leaving function, hosted by the Japan Lifesaving Association.

"The camaraderie, friendships gained and the good times with people from all over the world will truly cap off what has been a great few days," he says.

The next big event on the calendar is the pool-based lifesaving competition at the World Games in Poland for the New Zealand team of 10. Then, the focus will turn to the International Surf Rescue Challenge at Mount Maunganui in December, paving the way to the 2018 Lifesaving World Championships in Adelaide.

For more photos and action from the NZ team, click here. 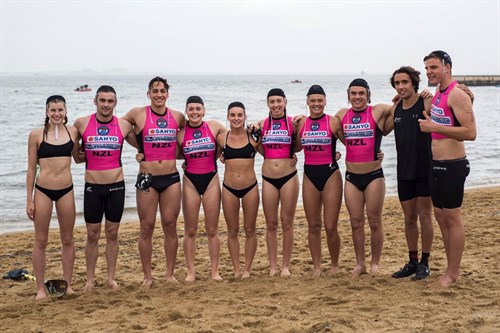 The New Zealand team at the conclusion of the 2017 Sanyo Cup in Fukuoka, Japan. Photo: Lester Kelly.