Every year, regional Awards of Excellence ceremonies are held around the country to officially recognise members for their hard work and dedication to Surf Life Saving in New Zealand.

One of the night's top awards, Lifeguard of the Year, was awarded to Sean Meagher from Westshore Surf Life Saving Club. The purpose of this award is to recognise a member who has made an outstanding contribution to the delivery and development of drowning prevention services for Surf Life Saving.

Volunteer of the Year was awarded to Jason Broome from Waimarama Surf Life Saving Club. The purpose of this award is to recognise an outstanding member who has made a significant volunteer contribution to enhancing surf lifesaving within their local area during the patrol season.

Sean and Jason will go on to be finalists in the national Surf Life Saving New Zealand Awards of Excellence, being held in Auckland in September.

Westshore Surf Life Saving Club took out two of the big awards for the night; Club of the Year and Rescue of the Year.

Debbie Moodie, Club Development Officer for Hawke's Bay, says the evening was a great way to celebrate the region's top lifeguards, volunteers and sports people and the end of another busy season. 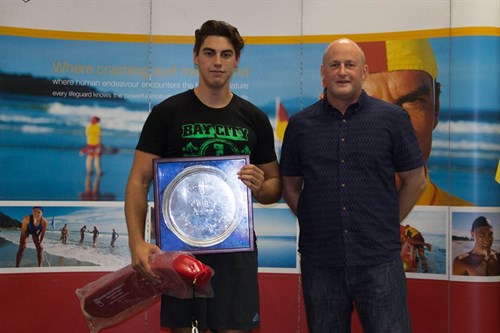 Sean Meagher receiving the Lifeguard of the Year award.