Omanu Beach and Waihi Beach Surf Life Saving Clubs have each received $5,000 from Zespri last night along with the honour of winning the Zespri Club of the Year titles for the Bay of Plenty and Coromandel areas respectively.

Part of Surf Life Saving's partnership with Zespri, which was formed last year, sees the top clubs in the Bay of Plenty and Coromandel awarded $5,000 from Zespri to spend on lifesaving equipment.

"Supporting these awards and providing free training for local lifeguards is our way of recognising the people who do so much for our communities, keeping our beaches safer for everyone to enjoy."

The 2017 Zespri Bay of Plenty & Coromandel Awards of Excellence took place at Club Mount Maunganui with the presentation of lifesaving, sport and regional service awards.

To allow for the recognition of more volunteers across the large area, the lifesaving awards are split between the two respective areas.

Bay of Plenty Lifeguard of the Year was awarded to Danielle Shepherd from Mount Maunganui Lifeguard Service.

The purpose of this award is to recognise a member who had made an outstanding contribution to the delivery and development of drowning prevention services for Surf Life Saving New Zealand (SLSNZ). It is aimed at active surf lifeguards undertaking lifeguarding duties.

Danielle patrolled 45 volunteer hours over the 2016/17 season and, among numerous other duties, was one of four key people involved in refreshing all 130 Mount Maunganui lifeguards.

"She is a great asset to Mount Maunganui and her community and she thoroughly deserves the title of Lifeguard of the Year," he says.

Coromandel Lifeguard of the Year was awarded to Chaz Gibbons-Campbell from Whiritoa Surf Life Saving Club.

Chaz has volunteered 100 patrol hours over the summer season, acted as Patrol Captain, was involved in search and rescue operations and sat on the Local Lifesaving Committee among many other duties.

Mr Emmett says Chaz is always an enthusiastic patrol member who has worn numerous hats for the club.

"He always made sure patrol members were kept busy with training and development, ensuring swimmer safety and proactively helping his community such as running demonstrations around rip awareness and rescue techniques. He is a great advocate of surf lifesaving," he says.

Volunteer of the Year for the Bay of Plenty was awarded to Paul Treanor from Mount Maunganui Lifeguard Service and to Jenny Peploe from Pauanui Surf Life Saving Club in the Coromandel.

The purpose of this award is to recognise an outstanding member who has made a significant volunteer contribution to enhancing surf lifesaving within their local area during the season.

Mr Emmett says not only has Paul and Jenny contributed greatly to their clubs but they have also had a positive influence on their communities.

Danielle, Chaz, Paul and Jenny will go on to be finalists for the national Surf Life Saving Awards of Excellence which will be held in Auckland in September.

Rescue of the Year was awarded to Mount Maunganui in the Bay of Plenty and Pauanui in the Coromandel.

Mount Maunganui's rescue took place on February 25 when, over the course of one hour, "Patrol Six" was deployed three times in a series of rescues as a rip developed. Despite the presence of warning signs, numerous swimmers were caught out and found themselves in need of rescue.

Pauanui's winning rescue took place on January 22 after the day's patrol had ended. The club received a call from the local Coastguard advising of two kayakers that had been swept out towards Shoe Island in very treacherous conditions. Lifeguards were quickly deployed in Inflatable Rescue Boats and located the kayakers, transferring them to a waiting Coastguard boat.

Mr Emmett says it was another great season for clubs in the Bay of Plenty and Coromandel areas and the awards was a great way to celebrate all that they have achieved. 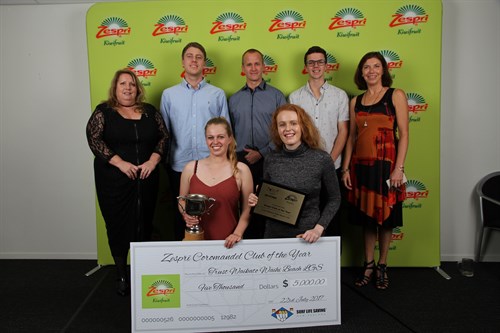 Zespri Bay of Plenty Club of the Year, Omanu Beach

SLSNZ celebrates the 2021 Awards of Excell...