Waikanae Surf Life Saving Club has claimed one of the most prestigious awards at the Zespri Gisborne/Tairāwhiti Awards of Excellence for the second year in a row.

18 year-old Connor Mitchell won Lifeguard of the Year award, following in the footsteps of his mum Michelle, who took the title last year.

The purpose of the Lifeguard of the Year award is to recognise a member who has made an outstanding contribution to the delivery and development of drowning prevention services for Surf Life Saving.

Renee Wikaire, Surf Life Saving New Zealand Club Support Office for Gisborne, says Connor carried out 26 hours of voluntary patrols over the summer season, acted as Patrol Captain and helped put four drivers and seven crewman through their IRB Awards. He also pioneered the IRB Development group with fellow awards nominee Andrew Shelton. This group has worked tirelessly over the past season with club members across the area developing their IRB skills.

"Connor has worn many caps for the club, making an impact in many different areas from lifesaving, instructing, mentoring and sitting on committees. He is a great asset to the club and the region."

Gisborne Surf Life Saving Clubs Ūawa Tiaki Tai-Tolaga Bay, Wainui, Waikanae, Midway and Ngāti Porou, came together at the Te Tini o Porou Conference Centre for night's ceremony to honour their hard work and dedication to saving lives in the community over the past season.

Volunteer of the Year was awarded to Sonia Keepa from Wainui Surf Life Saving Club.

The purpose of this award is to recognise an outstanding member who has made a significant volunteer contribution to enhancing surf lifesaving within their local area during the patrol season.

Ms Wikaire says throughout the season, Sonia volunteered 20 hours on patrol, was responsible for management and administration duties within the club and undertook a number of personal development opportunities to help improve her volunteer performance.

"She is a dedicated team member and always goes above and beyond. She is great advocate for Surf Life Saving and beach safety in the community."

Connor and Sonia will now go on to be finalists in the national Surf Life Saving New Zealand Awards of Excellence, being held in Auckland in September.

Waikanae also took away one of the night's biggest awards, Zespri Club of the Year, for the second year in a row.

Part of Surf Life Saving's partnership with Zespri, which was formed last year, sees the top clubs in Gisborne, Bay of Plenty and Coromandel awarded $5,000 from Zespri to spend on lifesaving equipment.

Zespri General Manager Grower and External Relations Dave Courtney says providing free training and equipment for local lifeguards is Zespri's way of supporting local communities. "We're proud to support the lifeguards of Gisborne as they keep the beaches safer for everyone to enjoy."

The winning didn't stop there for Waikanae who also won Rescue of the Year for an off-season rescue on August 28, 2016.

Two girls aged 11 and 14 had gone for a swim on an outgoing tide and got caught in a rip that dragged them out of their depth. Head coach Cory Hutchings had just turned up for training when he heard yelling down at the beach. He and newly qualified lifeguard Matt Proffit (14) grabbed two rescue boards and paddled out approximately 80 metres to rescue the girls who were distressed and had started submerging.

There was also a host of other lifesaving and sport awards presented on the night including Sportsman and Sportswoman of the Year which were awarded to World Champion Black Fins Cory Taylor (Midway) and Laura Quilter (Wainui).

Quilter, who was a quest speaker for the night, also took out International Sports Performance of the Year.

Ms Wikaire says the awards ceremony was a great way to celebrate everything that Gisborne/Tairāwhiti's five Surf Life Saving Clubs achieved over the 2016/17 season.

"They can all be proud of the contribution they have made to their local community," she says. 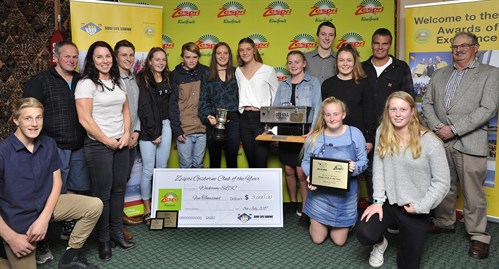