Locals sail to the front at Surf Life Saving event

The local Mt Maunganui team has pulled an early lead during the first day of competition at the second largest Surf Life Saving sports event in the country held in Tauranga this weekend.

Called the Eastern Region Championships, the event draws in over 800 athletes from around New Zealand, predominantly from the east coast of the north island and features two full days of competition.

While the local team, Mt Maunganui Lifeguard Service, have built up a 32 point buffer, Piha Surf Life Saving Club in second aren't far behind and promise to threaten the locals tomorrow with a team of 72 athletes.

A few athletic superstars feature in this year's event, including Olympians Lisa Carrington, who is competing for the Mt Maunganui Lifeguard Service and Marty McDowell who competes for Titahi Bay Surf Life Saving Club along with a bunch of world lifesaving champions from the Black Fins and Junior Black Fins.

Surf Life Saving New Zealand Eastern Region Sport Manager Mark Inglis said the first day of the competition has been close and it will be a great battle for top honours tomorrow with the majority of finals being held tomorrow.

"Everything has been great here at Mt Maunganui today. The weather has been perfect and feedback from the athletes tells us that they're enjoying the new format. Although the small swell means that a lot of the races are quite close so it's going to be a close fight tomorrow.

"And of course the caliber of the athletes is second to none. They've all been fantastic out there today and it's obviously great to have people like Lisa [Carrington], Steve [Ferguson] and Marty [McDowell] competing too, because it shows our younger athletes that they can rise to the top."

There are still several beach events to be held later this evening in the 'twilight session', including the iconic beach flags, where athletes start in a prone starting position on the beach, before they rise, turn and race approximately 20m across the sand to obtain a baton (beach flag) seated upright in the sand. Since there are always fewer batons than competitors, those who fail to obtain a baton are eliminated, but it's always close and attracts a lot of support from the side-lines.

The Eastern Region covers 19 clubs on the eastern coast from Hot Water Beach in the Coromandel to Midway Surf Life Saving Club near Gisborne.

The action kicks off again tomorrow from 8.00am at the main beach at Mt Maunganui, where athletes will tackle a series of events including the demanding Iron Man and Iron Woman events. Spectators are welcome and spectator entry to the event is free. 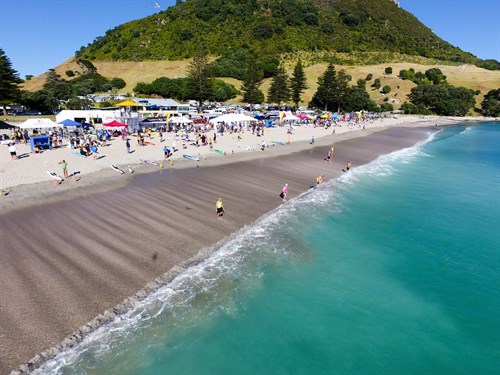