The New Zealand Representative Challenge has seen Capital Coast [Wellington] emerge victorious in the open division, after a day of incredibly close racing at Waimarama Beach in Hawkes Bay.

With a series of demanding races on land and in the water, the team finished less than 10 points ahead of second placed getters from the Bay of Plenty, with Taranaki rounding out the podium in third.

The winning team managed to take top points in most of the team events including the oceanperson relay [comprising of a swim, ski and board elements], board rescue, rescue tube rescue and ski relay. Although they had the added bonus of two Olympians, Marty McDowell and Kayla Imrie, and two Black Fins [New Zealand surf lifesaving team] Steven Kent and Samantha Lee competing as part of their team.

Meanwhile, the youth division [athletes aged 14-18 years old] was equally as close with Taranaki taking the top honours with a total points haul of 125. Only five points behind and in second place was the Bay of Plenty while the Gisborne region team finished in third.

While rain threatened the event throughout the day, competitors enjoyed a largely dry day with only a few light showers and near flat surf conditions. Event officials said with the surf being less than half a metre, it was an even playing field on the water so a lot of positions were made up during the running sections.

There was no such luck for the local crews from Hawkes Bay who finished the event in sixth [youth] and fifth [open], although they say they're still happy with their performance and the highlight was having athletes from around the country visit their home in Hawkes Bay.

Surf Life Saving New Zealand sport manager, Mike Lord, said "It was another successful event with our athletes playing hard but fair out there. The close racing was a real highlight for us and we look forward to seeing more of these athletes compete at more of our upcoming events."

"We would also like to take this opportunity to thank all the volunteers who made this event happen. They worked really hard out there all day to put on a safe and fun event for all of our athletes and their supporters."

Many of the events held today mimic real life rescues for the qualified surf lifeguards competing in the events, including the rescue-tube rescue which sees four competitors from each team participate: a "victim," one rescue tube swimmer, and two rescuers. The victim swims approximately 120m to a designated buoy, signals, and waits to be rescued by the rescue tube swimmer. As they return to shore, the remaining two rescuers enter the water to assist and carry them to the finish line. 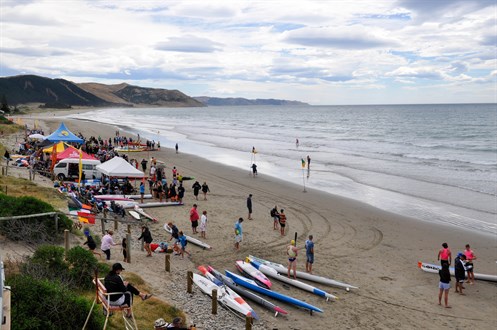