Auckland's rugged West Coast will welcome the fourth and final round of the New Zealand Surf Boat Series this weekend.

The Piha Big Wave 'Day of Giants' will take place on Saturday afternoon with 33 crews entered from Surf Life Saving Clubs around the country.

The first three rounds of the series included the Titahi Bay Classic in December, the Whangamata Surf Boat Spectacular in January and the North Island Surf Boat Championships at Waihi Beach earlier this month.

It will be a close battle between the Open Men's crews the Red Beach Boomers and Paekakariki White Chocolate as only two points separate them heading into the final round. The Titahi Bay Dragonz are eight points behind in third spot.

In the Open Women's division, the Muriwai Meerkats have a more comfortable lead of 14 points having won all of the first three rounds. The Red Beach Muzzies and Titahi Bay Timders are separated by just two points for second and third respectively.

The events being contested involve Under 19, Under 23, Open and Masters Men's and Women's Long Course races with a run finish.

Occasional rain is expected on Saturday afternoon along with Northerly winds and a 2.2 metre swell and Surf Life Saving New Zealand Sport Manager Mike Lord says that could test some of the crews.

"The Piha Big Wave is likely to be the biggest surf the crews have seen so far this series with reasonably small surf conditions for the first three rounds. It's always a fun way to finish off the series and I know the crews will give it their all for a shot at winning the series title," he says.

For full results from the first three rounds and overall standings to date, click here. 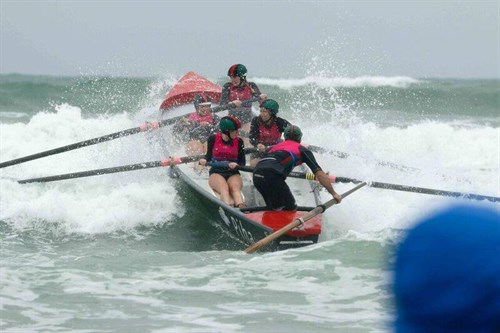