Surf Life Saving's Northern region has emerged in the top spot at the annual New Zealand Representative Surf Boat Challenge, held for the second time this year at Waihi Beach this weekend.

It was a close fight between the Northern and Eastern regions, who stayed within mere points of each other until the closing stages of the event. The Northern region consists of 17 clubs from the Far North, to Raglan, south of Auckland on the west coast.

The usually formidable Eastern region, covering the east coast of the north island from Hot Water Beach to Midway south of Gisborne, finished in second in the calm and relatively flat surf conditions.

The Southern region finished in third while the country's largest region with 20 clubs, the Central region, finished in fourth.

Surf Life Saving sport manager Mike Lord said "The success of yesterday continued today, and it was fantastic to see just how close all the results were. It was great to watch because all of the races were incredibly close, so well done to all of the athletes for their commitment to an action-packed weekend of surf boats."

It was almost a clean sweep Titahi Bay who nearly won the three separate finals, but Paekakariki edged them out in the first of the finals where they finished second, before winning the second and third finals.

Ultimately the Titahi Bay Dragonz won the main event comfortably, with the Sunset Young Guns finishing in second and the Whangamata Baby Barry's in third.

"The Champions of Champions event is one of the most special surf boat events we hold and it was fantastic to have Dan [Harris] here to watch it. The athletes all did incredibly well, as they did all weekend," said Lord.

"Also a huge thank you to all the volunteers and officials who made the event run perfectly. And of course another huge thanks to the locals at Waihi Beach who made us feel welcome and really looked after all of us."

The Surf Life Saving sport season continues throughout the coming weeks, with various events all over the country, with one of the major events "Oceans 17" taking place in Mt Maungaui on March 2-5. 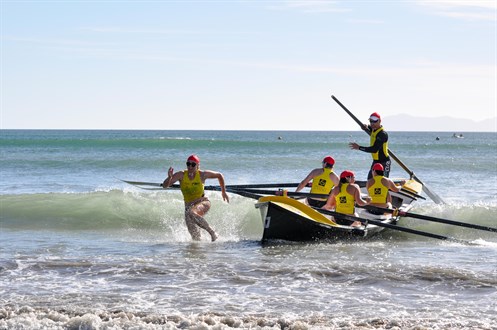