Home advantage for Kiwis as they take on annual Aussie battle

A home advantage will play in the favour of New Zealand's representative surf boat crews on Saturday for their annual battle against the Aussies.

Saturday's Trans-Tasman Challenge will be a three race series for the Open Men and Women's crews with combined points accumulating to a champion nation who will be presented with the Trans-Tasman Surf Boat Challenge trophy.

Known as the Oar Blacks, the Open Men's crew from North Beach in Christchurch is made up of Frano Staub, Daniel Smith, Nathan Keys, Jared Glue and sweep Dean Isherwood and the Open Women's crew from Muriwai of Nicole Owen, Kathryn Wright, Jessica Parkin, Alison Craigie and sweep Ricky Butt.

The Oar Blacks will be accompanied by two New Zealand Development crews who will race against the Open crews in the three race series, along with the Australian's two development crews.

New Zealand team manager Clayton Kellett says it's been fantastic to see the four crews coming together as one team in the lead up to this year's challenge.

All 20 athletes, along with Mr Kellett and assistant team manager Steve Dickson, took part in a team camp at Waihi Beach two weeks ago.

Mr Kellett says the camp acted as a good opportunity to fit in another training session at the race venue and also bring the team closer together.

"It's been really pleasing to see the four crews come together as one unit. The idea of team unity has been pushed from day one and everyone's bought into it," he says.

The notion of one team has been reinforced with the appointment of Ricky Butt as team captain to lead all four crews.

Mr Kellett says the accumulative points system requires the whole team to perform in order to win the trophy. "That's why it's important for all four crews to think like one team," he says.

The Trans-Tasman Challenge is hosted by Australia and New Zealand on alternating years. Last year, the Kiwis narrowly lost out to the Aussies.

Mr Kellett says having the home ground advantage this year is a real plus.

"When you're away, you're out of your comfort zone and back home you have the support of friends and family which, by default, is a real boost. It's an honour to pull on the black cap in front of peers and hearing the cheers on the beach and getting a pat on the back from your supporters is extra ammo that can make all the difference," he says.

Alongside the Trans-Tasman Challenge will be the third round of the New Zealand Surf Boat Series, the North Island Surf Boat Championships.

Muriwai is currently leading the Open Women's ranks of the New Zealand Surf Boat Series having held on to their lead at round two in Whangamata earlier this month. The Open Men's division saw a change in the points table with Paekakariki now in the lead after the first round's leaders North Beach sat out round two.

Surf Life Saving New Zealand Sport Manager Mike Lord says with the North Beach crew back in the game for round three, and also representing New Zealand in the Trans-Tasman Challenge, we could see them back in the lead at the end of the weekend.

"That's the beauty of the New Zealand Surf Boat Series; things can change from round to round and it ultimately comes down to the accumulation of points at the end of all four rounds," he says.

Made up of six crews per team, they will battle it out over a three race series; one long course, one short course and one surf boat relay. The winning region will have the highest total points across the three races per age group.

Mr Lord says the representative event format was developed last season to create a step in the pathway towards achieving national representative honours.

The weekend of racing will conclude on Sunday afternoon with the Champion of Champions, which is an open event allowing all crews to test themselves against the best in the business.

Races will be run as short course through heats and a finals round to eventually find the Champion of Champions crew.

Racing begins at 10am on Saturday. Live results throughout the weekend can be found at /sport/results-records/live-results/ 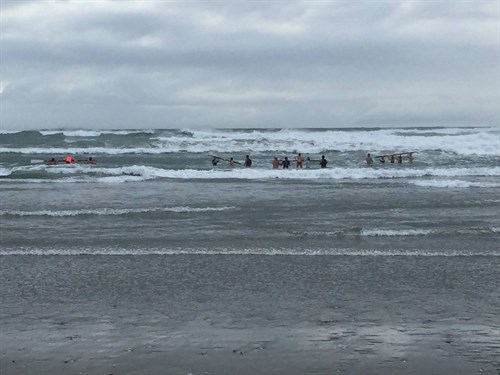 The New Zealand representative surf boat crews train at a team camp at Waihi Beach ahead of the Trans-Tasman Challenge.