Racing was so close between the two nations that it came down to the final race of the day for a winner to be decided for the second day [or test], as they sat on equal points after an intense day of racing.

While New Zealand's Black Fins got pipped at the post for the 2nd test win, they are still within reach for the overall win as points are accumulated after the three tests [days]. The top points scorer will then be declared the 2017 DHL International Surf Rescue Challenge Champions tomorrow evening at ASB Baypark Stadium Lounge.

Meanwhile, the fight for third is heating up after South Africa beat the United States of America (USA) by three points. This also means the overall battle for third will come down to the last day as the two nations are separated by one single point.

Great Britain rounded out the top five and finished only two points behind USA, meaning they could still pose a threat to the overall result. Japan finished in sixth while Canada finished the day in seventh.

Meanwhile, in the under-19 youth division, it was a history making day for the Kiwi team, the Junior Black Fins, who won their first ever test since the series started in 1999 which makes it a "big deal".

While the New Zealand team is ecstatic about the result, they know it will be tough to beat the Australian team again tomorrow, who finished today in second, but say they are proud to take a win for the Kiwis on home soil.

Rounding out the youth podium in third was South Africa with 62 points. Great Britain finished in fourth and USA in fifth.

DHL ISRC event manager Ross Merrett said he can't believe how close the racing has been today but is again impressed by the sportsmanship being displayed by all the athletes.

"I didn't think the racing could get any closer but the athletes have proven me wrong today. The racing has been absolutely incredible today and there are lots of great battles going on. The overall winner will be decided tomorrow as will third place, so there is a lot on the line for every single team so I'm sure they will be giving it everything.

"I've also had a lot of comments from teams, spectators and athletes saying they think this is the best International Surf Rescue Challenge ever, because of the quality and depth of racing, but also because of the venue. They've all said how great the local community has been plus the proximity of all the services, which has just made it a really enjoyable and easy place to come and compete."

Merrett added that he knows of supporters who have travelled specifically to Tauranga from as far as Wellington and Northland to support the international teams.

The event is based over three tests, which includes swim, surf board, surf ski and beach events. The ISRC originally started in 1939 as the Trans-Tasman Series between Australia and New Zealand, with the current format of the event first conducted in 1999, which included South Africa and then followed by other countries.

The original Trans-Tasman Series is now contested as the Trans-Tasman Trophy within the ISRC, where New Zealand hasn't won since 1950; a result they wish to overturn this weekend.

The third and final day of the DHL International Surf Rescue Challenge continues tomorrow from 8.30am. 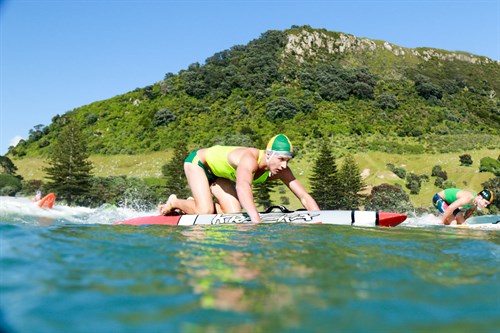