Surf Lifeguards from the Bay of Plenty and Coromandel will make up a large portion of the candidates attempting to gain the highest qualification when it comes to lifeguarding at this weekend's National Lifeguard School in Taranaki.

Eight of the nineteen candidates come from Surf Life Saving's Eastern Region and thanks to the support of regional partner Zespri, they will receive a scholarship to cover the user-pays component of the course cost.

Zespri came on board as the region's primary partner in February 2016 with a focus on providing free training opportunities for all local lifeguards.

Eastern Region Manager Chris Emmett says in that time, the partnership has had a real impact on the training and development of lifeguards, enabling Surf Life Saving in the Eastern Region to provide a better service to the local community.

"Having eight candidates taking part in this year's National Lifeguard School is a real testament to their skill and development gained through the support of Zespri," he says.

Set to take part this year is Omanu Beach Surf Life Saving Club's Donal Boyle who, at 56 years-old, is one of the school's oldest candidates.

Donal joined the club 15 years ago at the same time as his two daughters started the club's Nippers programme. Since then, he gained his Lifeguard Award at the aged of 49, has been Chairman, the Eastern Region's Volunteer of the Year for two years running and was recently recognised with a local hero award.

He has been training for three years to meet the required swim time which shows his training and commitment.

Mr Boyle says he applied for National Lifeguard School to continue his development journey as a lifeguard.

"All of the surf lifesaving awards I have obtained so far have challenged me to go outside of my comfort zone. I could not swim confidently until I started working towards my Bronze Lifeguard Award so, over the years, all the training has certainly paid off, he says.

"Gaining the awards helps me to gain great skills to deal with situations, not only in Surf Life Saving, but in our community every day."

Mr Boyle says the National Lifeguard School will certainly be a challenge but he is looking forward to the new knowledge and skills that he will gain through attending this course.

"Also as an older, or more mature, lifeguard it is a chance to show you are never too old to challenge yourself and upskill in areas that are outside your comfort zone. At Omanu we train a lot of new young lifeguards so to have some older lifeguards in the mix gives a good balance. I love it when Labour weekend rolls around each year and I get to put on the uniform and get back on patrol," he says.

Gaining a better understanding of managing himself and other lifeguards in a variety of critical situations that they can come across in surf lifesaving is one of the things he's most looking forward to about this weekend.

He says he was very surprised and honoured to be selected to attend National Lifeguard School thanks to the Zespri scholarship.

"I value my time that I put towards surf lifesaving and to know that an international company such as Zespri also shows their commitment and appreciation of the hours lifeguards commit is very motivating, he says.

"They have chosen Surf Life Saving Eastern Region as a charity they see worthwhile in supporting and to be a recipient via the scholarship is an honour."

For 25 year-old Haven, the thrill of being kept on his toes for three days during scenarios such as rock rescue simulations and jumping out of a helicopter is what he's most looking forward to.

National Lifeguard School is one of the last pathways for him to complete in his training and receiving the Zespri scholarship was a huge honour for him and knocked down a wall that would've otherwise prevented him from taking part.

"I will benefit hugely from this experience and will be privileged to share all of my stories and experiences with my local surf clubs," he says.

Like Haven, Gabriel (21) is looking forward to the rescue scenarios they will be presented with along with advance First Aid, getting to know other lifeguards from around the country and gaining new skills to help improve lifeguarding at Omanu.

"I feel very lucky to have received a Zespri scholarship and to have the opportunity to become better as a lifeguard," he says.

Liam (17) hopes that the school will provide him with knowledge that he can execute in the practical field on his home beach to the benefit of his fellow club members and his community.

"Being the highest lifeguard qualification on offer, I feel like it will enable me to lead from a more certain and solid perspective, he says.

The scholarship will allow him to complete the National Lifeguard School at no cost.

"I'm very fortunate to have received this scholarship and it will let me proceed to become better at serving the community," he says.

"We're proud to support the next generation of lifeguards from Coromandel to Gisborne through this programme, as they keep our beaches safe this summer." 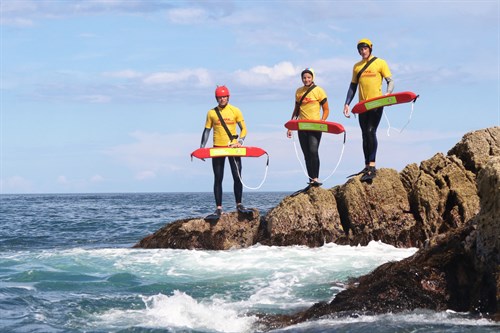