Omanu lifeguard Haven Bellamy has achieved the highest award when it comes to lifeguarding in New Zealand.

He was presented with a plaque on behalf of the 21 Club from Todd Velvin and a rescue tube by Surf Life Saving New Zealand president Brian Velvin.

Haven says he found the course really pushed him out of his comfort zone, not just physically but mentally as well.

"I really enjoyed being at a different beach with people I had never met or worked with before. My team and I became quite a tightknit unit by the end even though we started off as complete strangers. It was a great networking experience and I truly have made friends for life; we constantly shared stories and experiences which was really eye opening as we all come from different backgrounds," he says.

One of his highlights for the weekend was the advanced Inflatable Rescue Boat (IRB) training, learning to navigate around rocks in quite a different environment to what he's used to at Omanu Beach, along with the rescue helicopter work.

Earning the honour of top candidate means a lot not just to him, but his club too, he says.

"I am honoured to receive this award and it will inspire the next generation of lifeguards from my club who follow on behind me. I'm very proud of my achievement and I will definitely not be stopping here," he says.

"We had 19 of New Zealand's best lifeguards taking part this year. They all have to be at a really high level just to be selected for National Lifeguard School so topping the list is an outstanding achievement that Haven should be incredibly proud of," she says.

Throughout the weekend they were tested both mentally and physically on a number of tasks from advanced IRB training, rock swimming, helicopter jumps, search and rescue and patrol scenarios.

Ms Slement says Fitzroy was a fantastic location to host the school, providing many opportunities for learning and development both in and out of the water.

"We had hot sunny weather all weekend and observed all of the candidates working hard to challenge themselves and develop their lifeguarding skills," she says.

Part of Surf Life Saving's partnership with Zespri, which was formed last year, sees a number of scholarships available for the annual National Lifeguard School to cover the user-pays component of the course cost for Eastern Region candidates.

This year, eight of the 19 candidates came from Surf Life Saving's Eastern Region.

"Providing free training for local lifeguards is our way of recognising the everyday heroes who do so much for our communities, keeping our beaches safer for everyone to enjoy."

Pauanui's Xavier Murphy says National Lifeguard School was amazing and it pushed the candidates to challenge not only what they think but also how they lifeguard through a mixture of theory and practical sessions.

"My highlight was getting to jump out of the rescue helicopter- it was the most exciting thing I've done through surf lifesaving," he says.

Xavier says being one of the Zespri scholarship recipients was an honour.

"It made me feel stoked that they were willing to support me to train at what I love to do so I am able to be more effective at saving lives on the beach," he says.

For more information about the National Lifeguard School, click here and to view photos from the weekend, click here. 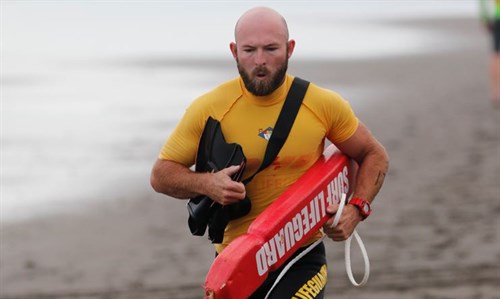