The Surf Life Saving patrol season officially started at Labour Weekend and has seen volunteers patrolling on the weekends at Mt Maunganui, Omanu and Papamoa with the weekday Regional Lifeguard Service being brought forward by one week and now due to begin on December 11.

SLSNZ Eastern Region Lifesaving Manager Chase Cahalane says the great weather coupled with warm water temperatures over the past week has seen huge numbers visiting the three main beaches much earlier than usual for this time of year.

"It's great to see so many people out enjoying the beach but the surf is up and there are a number of rips running through that people need to be cautious of," he says.

Off-duty volunteer lifeguards have been busy at Mt Maunganui today, carrying out preventative actions and assisting people from difficulty.
Due to the warmer weather and increased numbers on the beach, two lifeguards will be stationed at Mount Maunganui's Main Beach tomorrow from 11am to 7pm in an observational capacity. While a flagged area won't be operating, the lifeguards will be providing surf safety information to beachgoers and responding to incidents if required.

From next Monday, there will be two lifeguards on observational duties at each of the three main beaches throughout the week. Regular patrols will commence on December 16, seeing the flags up seven days per week.

Every year, around 60% of the rescues carried out by lifeguards are the result of a rip.

Mr Cahalane says a lot of people panic when they find themselves caught in one and they tire themselves quickly by trying to fight against it.

"Instead, you should stay calm and put your hand up and wave it side to side to attract attention. Try to fight the urge to swim against the current; this will use up energy that you need to stay afloat. Most people can float for a lot longer than they can swim so lie on your back and let the rip sweep you along until the current weakens. When the current has subsided, swim parallel to the shore for 30-40 metres before returning to shore, swimming slowly," he says.

The safest place to swim is always between the flags as lifeguards actively seek out the safest place on the beach to set them up and will regularly move them throughout the day as the surf conditions change. 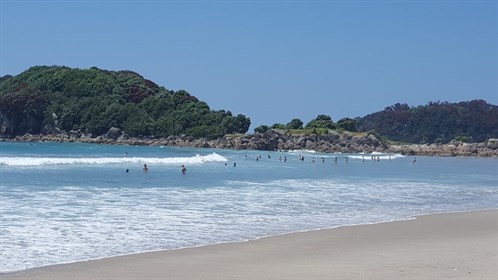