They sat in first equal overnight with St Clair Surf Life Saving Club of Dunedin, who ultimately finished in second at the annual event which this year attracted 83 crews from around the country. Both Sunset Beach and St Clair had eight crews meaning the contest was neck-and-neck the entire weekend.

"Overall, it was another fantastic weekend of BP New Zealand IRB Champs. The crews all raced  to the highest standard and while it was really competitive, it was great to see the camaraderie and friendly-banter within the IRB-fraternity.

"We [event organisers] would also like to extend our thanks to all the officials and volunteers who have allowed this event, and actually most of the events this season, to happen. Many of them have come to the majority of our sports events throughout the season and we simply couldn't run it without them."

Mr Cations-Velvin also praised the Waipu Cove Surf Life Saving Club for being wonderful hosts, as well as the local Waipu community, who both contributed to the overall smooth running of the event.

At this sports event, some of the top teams are able to attach their engine to the IRB, turn it around, get into the water, pick up a patient and return to shore in around 40 seconds. In a real-life rescue situation, where every second counts, this could be the difference showing how important surf sport events such as this one are in upskilling lifeguards.

This event marks the conclusion of the 2016-17 Surf Life Saving sport season. Thousands of athletes have competed across the country over the past season in a variety of events, which ultimately increases their skill level and allows them to save lives on New Zealand beaches. 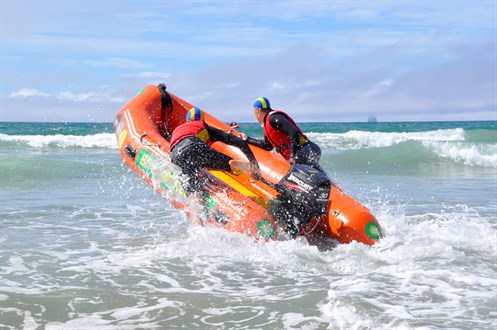