Volunteering over 50 hours on patrol and another 80 hours of event lifeguarding, coupled with a can-do attitude, has won a Hamilton man the honour of Lifeguard of the Year.

The NZ Lottery Grants Board Lifeguard of the Year award is the pinnacle of surf lifesaving in New Zealand and highlights the skill, experience and dedication of the lifeguards who give up their time to make our beaches safer.

Christiaan has instructed many lifeguards throughout the season including Inflatable Rescue Boat (IRB) and rescue board training along with being head instructor at the Intermediate Lifeguard School. He also took part in the National Lifeguard School where lifeguards can gain their Advanced Lifeguard Award, the highest award for surf lifesaving in New Zealand, and he was awarded 'top candidate'.

Surf Life Saving New Zealand CEO Paul Dalton says Christiaan's commitment and dedication to his club, region and surf lifesaving in general is outstanding. "Despite working full time, with a young family, he never hesitates to step up and lead by example. He is a great role model to the young lifeguards that he is helping to train and they will benefit greatly from his knowledge," he says.

Owen was initially a member of Rarangi Surf Life Saving Club where he gained his Surf Lifeguard Award in 2001. He then moved to Invercargill for work a few years ago where he became part of Oreti and is now Club Captain. At the start of the 2014/15 season, the club only had nine lifeguards registered. Taking on numerous roles, Owen has played a big part in rebuilding the club which now has 29 lifeguards.

Last season, he volunteered 37 patrol hours on top of supporting 10 new lifeguards through their Surf Lifeguard Award and assisting members through other qualifications such as First Aid and IRB awards.

Every year there are a number of significant rescues that take place on our beaches and these rescues literally save lives. Every month from November to April, clubs across the country enter their most prominent rescues and they are judged against each other for the title of BP Rescue of the Month. Those six monthly winners then become finalists for BP Rescue of the Year.

This year, the title went to Bethells Beach Surf Life Saving Club for an off-duty rescue of six swimmers. Just after 5pm on February 21 lifeguards Dean Maddaford, Shane Dwyer, James Newland, Andrew Carr and Robin Hammond were packing up when they noticed the group caught in a rip around 300m off-shore. They quickly launched an IRB and swam out with rescue tubes to help the swimmers who were at the back of massive surf and were seriously close to drowning. Their actions avoided a certain number of deaths in some very difficult conditions.

DHL Instructor of the Year was presented to Lucy Scown from Waihi Beach. The 18 year-old instructed two four-day lifeguard camps with 34 candidates where she achieved a 100% success rate. She has coached Junior Surf athletes on Sunday mornings for three seasons and also instructs at the club's pool swim programme in Katikati multiple times a week. The program has over 50 participants; mostly members of the club but the program is open to anyone in the community.

DHL Innovation of the Year was awarded to Max Corboy from St Kilda Surf Life Saving Club for beginning the discussion of moving the Otago/Southland radio network from an analogue simplex network over to a new digital repeater network. It came at a time when a number of Search and Rescue (SAR) call-outs and pre-season trainings had limited radio coverage and, in some cases, was next to nothing in and around the cliffs and inlets south of St Clair. Throughout the season, Max successfully installed a digital repeater and the results have been very successful.

Lifeguards, who were training nearby, responded immediately and commenced CPR. They administered oxygen and used the defibrillator to deliver shocks in between CPR until she began breathing again. The stabilisation of the patient on the beach was well coordinated and led to a successful outcome for the patient who could have died if it wasn't for the quick response of the lifeguards.

Also awarded tonight was the BP Media Award for best surf lifesaving story. All organisations need media profile and none more so than not for profit organisations like Surf Life Saving. Rips are a common problem along our coastline and every year, Surf Lifeguards save hundreds of swimmers from them. TV3 Story's coverage helped highlight the dangers and educate the New Zealand public about how to spot rips and the best way to get out of one which is valuable safety information at the start of summer.

A number of sport awards were awarded alongside the lifesaving awards.

For the fourth year in a row, Papamoa's Ross Merrett was named Surf Official of the Year. Ross is a well-respected local, national and international Surf Official. His workload over the past season was immense as an official and facilitator as well as developing and refining the event safety procedures for New Zealand.

Coach of the Year was awarded to Shane Radovanovich from Paekakariki who was coach and sweep of two boat crews last season. These crews ranged from the Under 23 Men to the Open Women and his abilities meant he was able to tailor sessions to cover the wide range of experience, capabilities and skills of all crews who went on to have a successful season.

International Sports Performance of the Year was presented to Lyall Bay's Samantha Lee for her efforts representing New Zealand at last November's German Cup. Her results included a gold, and new world record, in the 100m Rescue Medley along with another gold, silver, two bronze and top female competitor at the event. 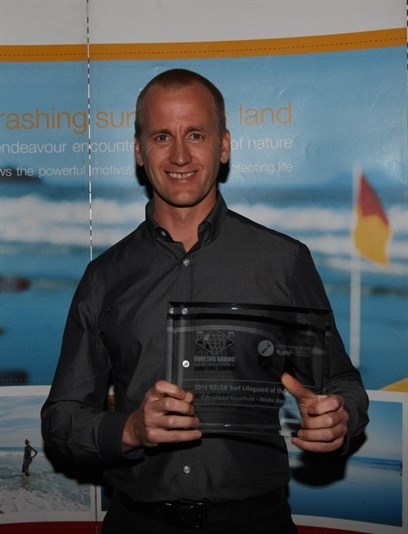