Four new New Zealand records contributed to the making of history overnight as the Black Fins took out the 2016 Lifesaving World Championship pool trophy in Eindhoven.

Traditionally stronger in the beach events, it's the first time New Zealand has taken out the overall win in the pool.

Wainui's Laura Quilter set the bar high heading into the finals on Day Three of the national teams' competition at Rescue 2016 taking silver in the women's 100m Manikin Carry with a time of 53.21- a new NZ record.

In similar fashion, Titahi Bay's Steve Kent also took silver and set a new NZ record in the men's 100m Manikin Carry with a time of 45.98.

Other highlights came from Quilter who took world championship gold in the women's 50m Manikin Carry with Samantha Lee close behind to take the bronze.

A proud moment came from Kent who, in his fifth world championships, is the first athlete in Worlds history to make A finals in six individual events and all of the relays.

The times over the last two days in the pool have really take a step up and they have been able to stay at the front of the progression, he says.

"A massive thanks to those that have helped out with the pool program especially video analyst Dan Grant and specialist coaches Scott Bartlett, Dean Kent and Michael Buck."

Mr Pocock says some of the day's highlights included Quilter's gold and silver and the two men's relay teams but special mention has to go to Kent's history making. "He is an absolute unit and one very special athlete," he says.

That caps off the pool events for the New Zealand Black Fins who will now turn their focus to recovery and strategy with a rest day on Friday before moving onto another two days of beach events in Noordwijk from Saturday night (NZ time).

The Kiwis have held on to their lead in the overall standings on 455 points ahead of Italy on 388 and France on 371. Australia and Germany round out the top five.

The Junior Black Fins also had a big day on what was their second and final day on the beach in Noordwijk before moving to the pool.

They claimed another eight medals between them including three silver and five bronze.

They are still in second place overall on 437 points behind Australia with 509 with France moving into third with 298 points.

"Team captain Hamish Miller led the team from every possible angle and was relentless. His performances resulted in two individual bronze medals in the men's Board Race, Oceanman Race and part of our Silver Medal Oceanman Relay team with Seb Johnson, Lewis Clareburt and Zac Reid," she says.

"We have been fortunate to have had two amazing days of warm, sunny weather on the beach with off shore flat conditions over the two days," Jonelle says.

The team will now make their way from the beach in Noordwijk to the Pieter van den Hoogenband arena in Eindhoven to begin pool racing on Saturday.

The biannual World Lifesaving Championships is the blockbuster event for lifesavers around the world. With several thousand competitors taking part, it is the largest international lifesaving sport competition in the world. All the events are based around rescue capability and are specific to saving people's lives.

The Black Fins are aiming to take out the national teams' title for the third time in a row after first prising the title from Australia in Adelaide in 2012 and again in France in 2014. 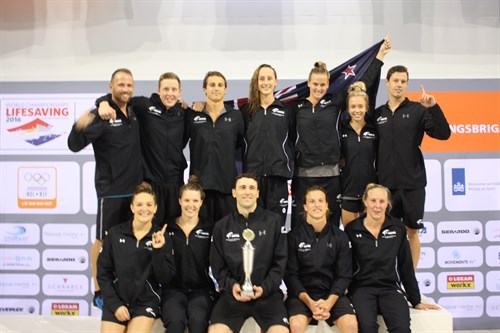