Black Fins take the lead after strong day in the pool

The New Zealand Black Fins demonstrated why they're the reigning world champions overnight (NZ time) as they moved into the pool rescue events at the 2016 Lifesaving World Championships in The Netherlands.

Their second day of competition at the Pieter Van Den Hoogenband stadium in Eindhoven saw them take the lead after some impressive displays from the athletes including a gold for Samantha Lee in the women's 100m Rescue Medley and team mate Laura Quilter right behind, taking the silver. In the men's, captain Andy McMillan took silver with Steve Kent taking the bronze.

Black Fins coach Jason Pocock says he's incredibly proud of how the athletes stuck to their plans and backed their preparation, especially when under pressure.

"Some stand outs were the usual superstars; Lee's 100m Rescue Medley plus Kent and McMillan in the 200m Obstacles and 100m Rescue Medley respectively. Quilter's three individual swims were superb and Peat's massive personal best for second in the 100m Manikin Tow was epic," he says.

Pocock says they were probably a bit unlucky in the line throw with Danielle McKenzie and Paul Cracroft-Wilson deserving more than their results show.

"But it was an amazing day of heart and belief. There are plenty of teams stepping up as seen by the world records being broken and the speeds in the B Finals, he says.

"We are looking forward to starting again in the morning. Thanks to everyone for their support."

At the end of Day Two, the Black Fins lead with 240 points ahead of France on 186 points and Australia on 182.

Over on the beach in Noordwijk, the New Zealand Youth team, the Junior Black Fins, kicked-off their first day of competition, making a dominating entrance, winning a total of 12 medals.

Some of the highlights included gold from the men's Tube Rescue team of Daniel Barron, Lewis Clareburt, Zac Reid and Seb Johnson.

Captain Hamish Miller took bronze in the male Ski and the men (Barron & Miller) and women (Grace Kaihau and Hannah Williams) both took silver in their Board Rescue.

Junior Black Fins coach Jonelle Quane says the team's first day of competition turned out to be a solid day of racing with Corrin starting off the medal tally with silver in the women's Board Race, shortly backing that up with a silver in the Surf Race.

"The team carried on winning numerous medals throughout the afternoon with some really close finishes with a gold medal still eluding us until the men's Tube Rescue final where our boys stepped up with a strong race leading from start to finish and winning our first gold for the Junior Black Fins," she says.

Quane says the team is very strong in their water events and continued that consistently onto the beach events where sprinters McCallum and Gedye added to the medal tally with very tight finishes. The beach relays rounded out the day providing some further exciting racing and nervous times waiting on results with both teams placing in the top three; the boys in second and the girls in third.

"Overall, the team performed superbly and showed a lot of pride and they are realising the opportunity that awaits over the coming days," she says.

At the end of Day One for the national youth teams' competition, the Junior Black Fins are in second place on 260 points, behind Australia on 283 points and South Africa in third on 176.

Overnight tonight (NZ time), the Black Fins will move on to their third day of competition in the pool at Eindhoven while the Junior Black Fins will have their second day on the beach in Noordwijk.

The biannual World Lifesaving Championships is the blockbuster event for lifesavers around the world. With several thousand competitors taking part, it is the largest international lifesaving sport competition in the world. All the events are based around rescue capability and are specific to saving people's lives.

The Black Fins are aiming to take out the national teams' title for the third time in a row after first prising the title from Australia in Adelaide in 2012 and again in France in 2014. 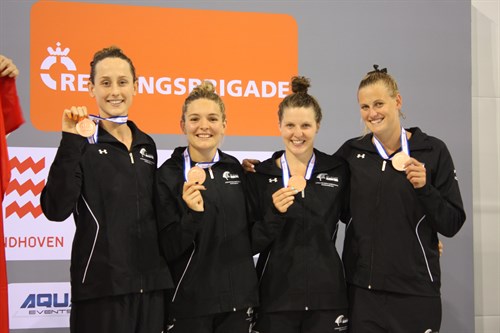