Another eight medals on the final day of Rescue 2016 contributed to an already successful campaign that has seen the New Zealand Black Fins crowned lifesaving world champions in The Netherlands overnight.

The team of 12, led by St Clair's Andrew McMillan, has created history once again as they're now the first Kiwi surf lifesaving team to win three consecutive world championship titles.

The Black Fins first prised the national team's title at the biannual Lifesaving World Championships from Australia in 2012 and once again in France in 2014.

With five days of competition split across the pool and the beach, the Lifesaving World Championships is the largest international lifesaving sport competition in the world. All the events are based around rescue capability and are specific to saving people's lives.

The Black Fins finished with 881 points ahead of Australia on 792 points with France in third on 599 points to hold on to the Alan B. Whelpton, AO Trophy.

The team started off their final day of competition on a high with Mount Maunganui's Olivia Eaton taking silver in the women's Beach Flags to add to her gold in the women's beach sprints from the previous day.

Mairangi Bay's Danielle McKenzie added another silver in the women's Ski Race with Omanu's Max Beattie then taking his first of three golds for the day in the men's Board Race. The other individual gold came in the men's Ironman and then with team mates Paul Cracroft-Wilson, Cory Taylor and Chris Dawson in the Oceanman Relay.

Captain Andy McMillan says he's ecstatic. "We've been dreaming of this day and we've taken it one step at a time. We thought about taking over back in 2012 and we've had this core belief of believing that we've got the ability to do it and we've never stopped believing and the last three world championships has shown it. We're stoked that we've been able to come up with the victory in the last three, he says.

"We've been planning for this for a long time so to achieve what we went after is special and to do with a heap of Kiwi supporters on the beach is even better."

Vice-captain Steven Kent says it's been a progression, building towards this moment to win the pool and the beach and the overall title at the same time. "It's something special that myself and the rest of the team will remember forever, he says.

"Winning the pool officially was a big step up from here we've been before and to back that up with the beach is something special that no one has ever done so to achieve both in the same Worlds, plus win the overall title, is phenomenal."

Coach Jason Pocock says it has been an absolutely amazing day. "The word for the day was being proud of the last day which meant being better than we were the previous days. The team took this challenge on and exceeded maybe even their own expectations. We had a tough start after Croffy (Paul Cracroft-Wilson) had a mishap in the flags but the team took on the responsibility to get behind him. Obviously Max's last day was ridiculously good but the whole team contributed to his and the team's success. It is great to be part of history and we look forward to continuing the Black Fin legacy in the future," he says.

Team manager Mark Weatherall says he too is incredibly proud of the team. "Massive heart and belief got us across the line. I am very proud of the management team involved; they have worked so hard behind the scenes for this win. Special thanks to Scott Bartlett (head coach in 2012 and 2014) whose work has helped us achieved today's fantastic result. The Black Fins are a special team, who have achieved something very, very special," he says.

The Youth team, the Junior Black Fins, had a successful day in the pool in Eindhoven on their final day of competition, which saw then finish second overall on 735 points behind Australia (926) with Italy in third (546).

Coach Jonelle Quane says she's immensely proud of the youth team. "It was an epic final day of racing with NZ records being smashed and the team frothing. It's so special being part of this talented group of athletes performing out of their skins. They exceeded our expectations and we all managed to have loads of fun along this journey," she says.

Team manager Ange Johnston says their campaign has been a huge success, allowing the team to experience and be part of some world class racing. "Amongst them all, we now have individual and team world champions, new NZ record holders, massive personal best times, a second overall title and life-long friends, she says.

"Our management team is proud of the athletes and we look forward to continuing to watch them excel in their future of surf lifesaving. Our congratulations go out to the Black Fins who have been instrumental role models to our team. Thanks to all the supporters and sponsors that joined us over here and those at home," she says.

Follow our teams on Facebook at www.facebook.com/slsnzhp and for a full breakdown of results, please visit http://livetiming.lifesaving2016.com/ 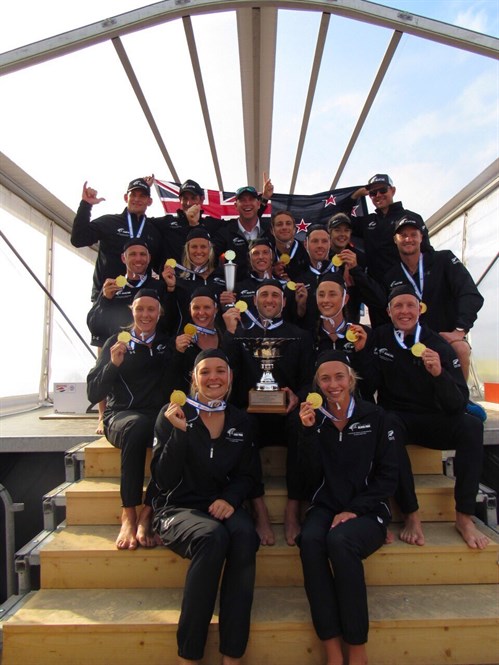