A record 603 competitors are set to take on the 2016 Surf Life Saving New Zealand Pool Championships this weekend with the annual event making a move to the Sir Owen G. Glenn National Aquatic Centre at AUT Millennium.

This will be the fourteenth consecutive year the event has been run and it is the first national event of the 2016-17 surf lifesaving season.

Formerly being held at Te Rapa Waterworld in Hamilton and Westwave Aquatic Centre in Henderson, it is the first time the event has been held at the Millennium Institute's world-class competition venue with a 50m Olympic sized swimming pool.

"The New Zealand Pool Championships is the single largest pool event in the country and it's unique for surf lifesavers in that, while the events are all based around rescue capability and are specific to saving lives, it is in quite a different setting than the surf they are typically used to," he says.

There will be around 400 races contested across age groups from 10 years through to Masters. Events include rescue medleys, line throws, swimming with fins while carrying a rescue tube and 'rescuing' a manikin off the bottom of the pool.

Mr Lord says the events help competitors of all ages train for surf-based rescues in a more controlled environment.

"Picking up a manikin that weighs around 60kgs is comparable to rescuing a person, while swimming under obstacles and picking up bricks from the pool floor is like ducking under waves and testing someone's ability to search underwater. These are all key skills that surf lifesavers need on the job," he says.

World champion surf lifesavers Laura Quilter (Wainui), Samantha Lee (Lyall Bay) and Steven Kent (Titahi Bay) will be competing for their clubs hot off their return from The Netherlands where they, along with their fellow New Zealand Black Fins, won the lifesaving world championship title for the third consecutive time.

This year's event, which is open to any International Surf Lifesaving Federation affiliated club, has also attracted attention from Australia where New South Wales has 10 athletes entered.

Racing begins at 9am on Friday with the 50m swim with fins and continues with a full day of racing on Saturday, concluding around 3pm on Sunday. 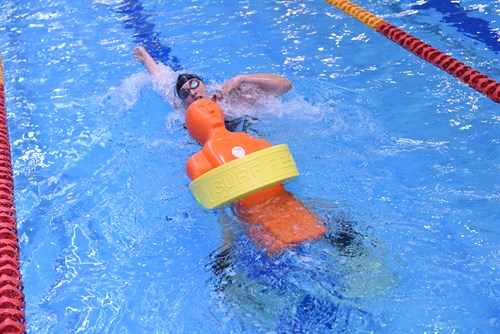