It's the first time the 19 year-old has taken part in the annual event, however he's no stranger to international competition.

He raced in the 2013 International Surf Rescue Challenge in Japan and was part of the Junior Black Fins team for the 2014 Lifesaving World Championships in France.

Cochrane says he's honoured to race for New Zealand and follow in the footsteps of his sporting idols who set the goal to show the rest of the world that Kiwis won't settle for second.

"I am now given the responsibility to step up to the mark and help this culture continue. After watching last year's international challenge and seeing how much heart and soul guys like Max Beattie put in for the black cap really gets you excited to try replicate. It is a huge honour and I am looking forward to the challenge."

Cochrane says as he's spent more time in the High Performance environment, he has learnt to focus on the process, rather than the result. His main advice for his team mates will be to focus on each day as it comes and string together a good five week block of training in the lead-up.

"When the hard work is behind us, Japan will be all about relaxing, getting behind each other as a team and enjoying racing and the results will follow suit. We have the opportunity to race some quality competitors in the likes of Nik Green, Josh Brown and Daniel Collins, who dominate the Australian scene, so it will be all about putting our best foot on the line and enjoying the challenge of racing against the world's best."

His main goal for the event is to see his team mates backing each other, enjoying their opportunity to represent New Zealand and competing to the best of their ability while showing a high level of sportsmanship to the other nations and officials.

"We are all so excited about this opportunity because racing for New Zealand is such an honour and a special feeling. I can't wait for us all to have the Black Cap on and make New Zealand proud."

Alongside Cochrane in the team of ten is St Clair's Carina Doyle and Mairangi Bay's Jake Hurley who also took part, and medalled, in the 2015 Sanyo Cup.

However, it won't be the first international competition for Boocock, Scott and Corrin who represented the New Zealand Youth team at the 2015 International Surf Rescue Challenge in Australia.

Corrin was also recently named in the Junior Black Fins team for the 2016 Lifesaving World Championships and will travel to The Netherlands in September with the New Zealand Youth team.

New Zealand Development Coach Kevin Morrison says the Sanyo Cup is a great opportunity for some of the newer athletes to have their first taste of international competition and for some of the more experienced athletes to test their performance at this stage of the season.

"We have a good group of athletes here who are keen to take the win for New Zealand after being narrowly beaten by Australia last year. I believe they have the confidence and ability to achieve that," he says.

Currently working as the assistant coach at BMD Northcliffe Surf Life Saving Club on Australia's Gold Coast, Morrison is new to the roll of development team coach but brings vast experience to the role after being involved in the sport for over 20 years, including representing New Zealand.

Morrison and the team of ten will be joined by team manager Steve Vaughan and assistant coach Danny Morrison.

They will depart on June 28 for the event that runs from July 2-3 in Miyazaki, Southern Japan.

The two days of racing will include events such as Surf Race, Board Race, Oceanman/woman, Beach Flags, Beach Sprint, Board Rescue Tube Rescue, Oceanwoman Relay and Beach Relay. 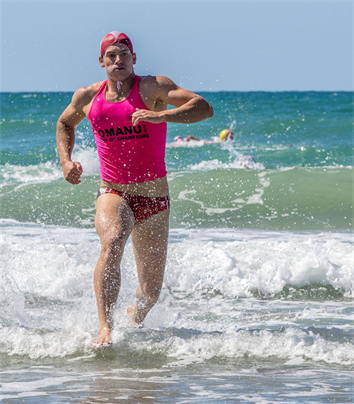