Almost 900 children, aged 10-13 from all around New Zealand, competed in the Under 14 New Zealand Surf Life Saving Championships in Mt Maunganui today.

The annual event, dubbed Oceans 16, is one of Surf Life Saving's biggest events and aims to encourage and promote young children to pursue a future in life guarding through fun activities and challenges.

It is run across four days and includes a huge variety of challenges both in and out of the water, including board races, swim races and running challenges.

Event manager, Scott Bicknell, said: "We couldn't have asked for a better opening day for Oceans 16. The weather has been fantastic, and while the conditions were challenging with the swell, we're really impressed with how all of our athletes dealt with it. They all did extremely well today and we're all really looking forward to tomorrow."

Today's highlights included three different competitions for the youngsters, starting with the "Beach Flags" trial. This sees children start from a laying-down position, before running 15 meters to claim one of 'beach flags' from the ground at the opposite end; and with less flags than competitors, it is a mad dash to grab a flag and proceed to the next round.

The self-explanatory run-swim-run race was held later in the afternoon, which sees the young athletes swim approximately 250 meters in the surf and run around 150 meters along the beach.

Today also marked the beginning of the board race heats, which feature on the schedule every day with finals held on Sunday.

Oceans 16 starts again tomorrow at the Mt Maunganui Surf Life Saving Club from 8am, with the board rescue trial taking place in the water first. Entry to the event is free and food, coffee and ice-cream is available on-site. 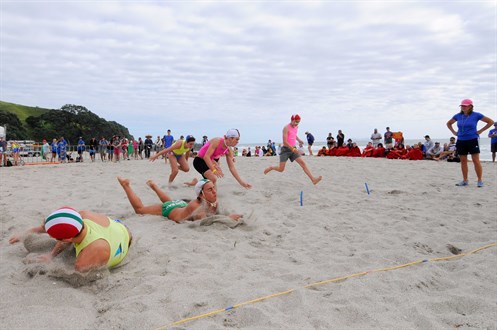