With Easter marking the official end to the patrol season, Surf Life Saving New Zealand is urging Kiwis to be cautious when swimming at an unpatrolled beach.

Traditionally, volunteer weekend patrols begin at Labour Weekend in October and continue through to Easter for most of the Northern Region and parts of the Eastern Region. In other parts of the country, where the weather is cooler, patrols have already ended.

Full statistics are still being collated and will become available in May but initial numbers show it's been a huge summer season for lifeguards across the country who have rescued in excess of last season's total of 1,328 people.

Surf Life Saving New Zealand National Lifesaving and Education Manager Allan Mundy says lifeguards have once again done an amazing job of helping to make the country's beaches a safer place for all to enjoy.

"We experienced some fantastic weather around the country throughout December and January, and particularly during the Christmas period, which saw thousands drawn to spending their holidays at the beach and lifeguards were certainly kept on their toes.

"Lifeguards spent over 200,000 hours on patrol, ensuring no one drowned while swimming between the flags on New Zealand's patrolled beaches this summer."

Lifeguards' primary aim is to prevent people from getting into trouble in the first place and the number of preventative actions undertaken this season was around 100,000. Preventative actions can be anything from moving swimmers into the patrolled area to picking up a piece of glass in the sand.

Lifeguards also conducted around 180 searches and on top of that, lifeguards treated around 2,000 people needing First Aid.

Mr Mundy says unfortunately, a large number of beach-goers continued to put themselves in unnecessary danger by swimming at unpatrolled beaches or overestimating their abilities in the surf which resulted in a high number of rescues- and sadly, a high number of drownings.

While the patrol flags will now be put away for the winter, the country's volunteer lifeguards will continue to be part of callout squads and search and rescue operations.

They will also continue training, upskilling and qualifying new lifeguards throughout winter so that they are ready to hit the beaches again from October.

Mr Mundy says bumper summer seasons are particularly hard on club's resources so members will also spend some time fundraising for new equipment that will need replacing before next summer.

To donate, visit www.surflifesaving.org.nz or text FLAGS to 849 to donate $3.

When swimming at an unpatrolled beach, SLSNZ encourages people to take care and understand what risks they may be putting themselves, or their children, into and take practical steps to avoid them.

Some clubs (particularly in the Northern Region and parts of the Bay of Plenty) may choose to extend their patrols on a case-by-case basis as a result of high visitor numbers and/or good weather. Please check with your local club for patrol times.

Figures included are provisional and will likely increase as further data is received from clubs. Confirmed data will be available in May.

*Preventative drownings are defined as all drowning deaths other than those that result from suicide, homicides and land/air vehicle accidents.

• Always keep a very close eye on children in or near the water.
• Get a friend to swim with you - never swim or surf alone.
• Watch out for that rip - rips are calm, deep patches of water close to shore that can sometimes have waves breaking to the side. Rippled, discoloured or foamy water with debris can also mean there is a rip present.
• Don't overestimate you or your children's ability to cope in the conditions. Even waist deep water can be life threatening if you step in a hole or get hit by a large wave. Preferably be in the water next to them at all times on a surf beach.
• If you're away from home, check with the locals and ask them about the conditions and the safest place to swim.
• If in doubt, stay out! 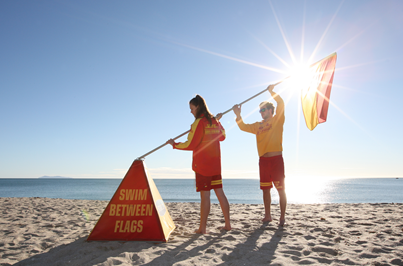