With Omanu keen to defend their 2015 Under 14 Surf Life Saving Championship title, the competition is set to intensify with only six points separating the top five spots; which include other local favourites Papamoa and Mt Maunganui, with Red Beach and Waikanae [Gisborne] also in the running.

Today's events started with a two kilometre beach relay before athletes moved into the water for the tube rescue, board race, surf race, and board relay events.

Event referee, Simone Spencer, said: "There was a really fantastic vibe out there today and we're [Surf Life Saving officials] really impressed with how everything went today despite a couple of minor challenges that were thrown at us.

For safety reasons race officials moved one of the water arena's further along the beach for the younger competitors early this morning.

"All of our athletes did an amazing job out there, as they always do, and it is awesome to see everyone being so supportive. All I hear is parents, friends and team-mates cheering our athletes on and that creates such a great environment here," continued Spencer.

Sunday's event line-up sees the young competitors compete for overall honours in the surf race, the board race, the diamond race, and the Grand Cameron. A Grand Cameron race, the final race of the four-day event, consists of six team members; three females and three males who either run, swim or paddle-board in a relay-style race.

The final day of Oceans 16 starts tomorrow [Sunday March 6] from 8am at main beach in Mt Maunganui. Spectator entry to the event is free and there are plenty of food and drink options available for purchase. 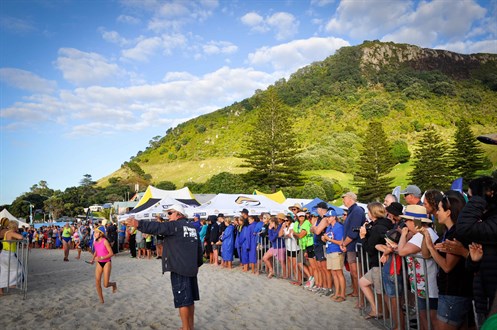