The rescue of six swimmers from a rip at Bethells Beach has won a national surf lifesaving award.

Each month, Surf Life Saving New Zealand selects a winning rescue from each region as well as an overall national winner for the title of BP Rescue of the Month. Bethells Beach has won the Northern Region award for February as well as being the national winner.

Shortly after 5pm on February 21, a group of six swimmers became caught in a rip around 300m off-shore in front of the patrol tower at Bethells Beach.

The patrol had finished for the day and the lifeguards, along with Patrol Captain Robin Hammond, were putting the equipment away.

Dean Maddaford and Shane Dwyer were the last lifeguards to leave the beach when they noticed the group in trouble. They quickly launched an Inflatable Rescue Boat (IRB) to help the swimmers who were now at the back of the massive surf and were close to drowning.

Noticing the need for further assistance for the multiple patients, James Newland entered the water with a rescue tube, followed closely by Andrew Carr.

By this time, the six swimmers had drifted further out to the back of the surf where the conditions had become very testing for the IRB pick-ups. James successfully secured one patient in a rescue tube and reassured a second while waiting for the IRB to return and assist him. Andrew also managed to reach James and assist his second patient.

Finally, the last two patients being kept afloat by James and Andrew, were picked up and returned to shore. With all six young men now on the beach, first aid checks were carried out with no further treatment required.

Their actions most definitely avoided a certain number of drownings in some very difficult conditions.

BP NZ Managing Director Matt Elliott says the bravery and quick thinking of the off duty lifeguards was remarkable. "Since 1968 we have been proud to stand behind this amazing organisation that can make the difference between life and death," he says. 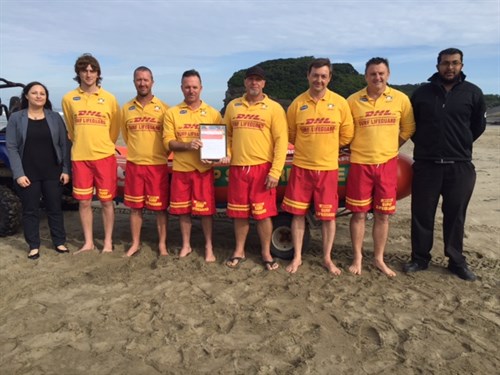