Competition heats up at U14 Surf Life Saving Championship

The second day of the annual four-day Under 14 New Zealand Surf Life Saving Championships held at Mt Maunganui in the Bay of Plenty, saw junior athletes compete in four challenging events both in and out of the water.

Competitors were put straight into the chilly water at 8am this morning before switching to events on the sand which was "a little warmer".

Event manager Scott Bicknell says: "Today was another hugely successful day at Oceans 16. The weather has been absolutely perfect all day, even though the wind picked up towards the end.

"Our athletes did an awesome job again, and so did all of our volunteers and race officials who stood out in the hot sun all day. Oceans 16 is shaping up to be another closely contested event so the action is only going to get better."

Today's events included a beach relay, a beach sprint (approximately 70 meters in length), a diamond race and a board rescue race. The diamond race sees the athletes use all three disciplines of surf living saving; swim, board and run.

The team board rescue race, made up of two competitors, mimics a real-life rescue with the assistance of a paddle board. The first competitor swims out to a buoy approximately 120 meters off-shore, before getting rescued by the second competitor, with both team members paddling back together and running up the beach to the finish.

Rivalry between surf clubs from around New Zealand also increased today, with the overall club title up for grabs. Last year's winners, a local crew from Omanu Surf Club, are keen to hold onto their title though are facing tough competition from other clubs like Papamoa, Mt Maunganui, Waikanae [Gisborne], Red Beach [Auckland] and Mairangi Bay [Auckland].

For many athletes, this is their one chance this year to show off their skills and improve their techniques as teams, coaches and officials travel from all around New Zealand; from as far North as Waipu Cove to as far South as Dunedin.

Oceans 16 starts again tomorrow [Saturday March 5] from 8am at the Mt Maunganui Surf Life Saving Club. Entry to the event is free. 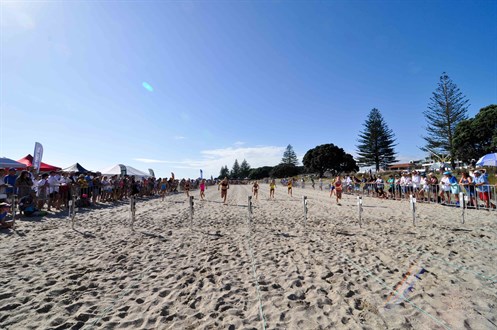