Event manager, Prue Younger said: "Overall it was a fantastic weekend for the Eastern Bay Energy Trust New Zealand Surf Life Saving Championship. Obviously we had to cancel a few events late this afternoon which was a little disappointing after such an awesome weekend, but safety is always our top priority so it needed to be done."

Due to the deteriorating weather conditions and increasing swell, a number of events on Sunday afternoon were cancelled or amended in the interest of athlete safety, though event organisers say the event was still a roaring success despite the changes.

"We're still really pleased about how the Eastern Bay Energy Trust New Zealand Surf Life Saving Championship went. All of our athletes did incredibly well and we were happy to see so many spectators and supporters out there cheering them on. There was a really great vibe out there all weekend," said Younger.

"We also wanted to extend our thanks to the local community who have been so supportive and welcoming. All of our teams have commented on how lovely the region is and how awesome the hospitality has been," added Younger.

Today's events consisted mainly of final events including the short and long course boat races, the ski relay, surf race, board race, a two kilometre beach run, and beach run relay along with two of the sport's toughest events: the Ironman/Ironwoman and Taplin events.

A Ironman or Ironwoman event consists of four surf disciplines; ski race, board race, a swim and run. The Taplin event is similar to the Ironman/Ironwoman events, but is considered a team-event and sees athletes each complete one discipline before tagging the next athlete.

The next event on SLSNZ's calendar is the BP Surf Rescue New Zealand Championship, the national IRB competition, and is set to be held on April 2-3 in Papamoa. 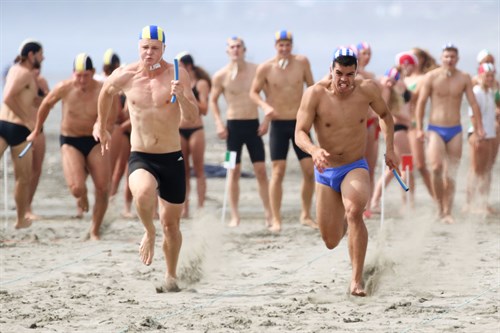