With just over two weeks to go until this year's Sanyo Bussan International Lifesaving Cup, the Kiwis have got their sights set on gold.

Last year, the Kiwis started strong, finishing in first place on the points table after the first day of racing, but incredibly close racing on day two saw them narrowly beaten by Australia by just four points.

Alongside Cochrane is St Clair's Carina Doyle and Mairangi Bay's Jake Hurley who also took part, and medalled, in the 2015 Sanyo Cup.

Hurley has a fair amount of international racing under his belt and was part of the New Zealand Youth team at the 2014 Lifesaving World Championships in France.

The 19 year-old Aucklander, who is studying for a visual effects major at AUT, hopes to one day help the New Zealand Black Fins take out Rescue 2018. His specialist events are beach sprints and flags.

Boocock, Scott and Corrin have also represented New Zealand together as part of the Youth team for the 2015 International Surf Rescue Challenge in Australia while Simpson was in the Open team.

Simpson, 23, is originally from Dunedin but represents Mount Maunganui Lifeguard Service and is now based on the Gold Coast. The land surveyor got into surf lifesaving at age 16 through swimming and credits focusing on technique as one of the keys to his training. He hopes to make the Black Fins team for Rescue 2018 and says representing New Zealand on a world stage is an honour that comes with a responsibility to live up to it.

18 year-old Boocock from Red Beach Surf Life Saving Club specialises in the surf race and says the chance to be part of this year's Sanyo Cup team means a lot. "Any time you put on the silver fern, it makes you feel something pretty extraordinary," she says.

At just 16 years-old, Corrin is one of the youngest athletes in the team. The Gisborne High School student is proud of winning gold at the recent 2016 Australian Surf Life Saving Championships in the Under 17 Surf Race and making the Junior Black Fins team for the Lifesaving World Championships in The Netherlands this September. "It's such an honour to represent your country doing something you love," she says.

As one of the "newbies" to national representative level, Fyall (19) says representing New Zealand on a world stage is a dream. "Ever since I started surf lifesaving (at age 13) it has been my ultimate goal to represent my country; so finally being given the opportunity is a massive honour," she says.

The beach sprinter is originally from Gisborne but these days is based in Auckland where she studies sport and recreation at AUT.

Hart is originally from England and, while he represents Papamoa Surf Life Saving Club in New Zealand, he is currently based on the Gold Coast where he represents the Currumbin Beach Vikings. He started surf lifesaving at age nine and specialises in Ironman and Board. He agrees it's a privilege to wear the silver fern and says some of the best advice he was given was to believe in yourself. "If you can be honest with yourself and say you gave 100% then that's all that can be asked of you."

Like Hart, Miller is currently based on the Gold Coast although she calls Mount Maunganui home. She is currently studying accounting and human resource management while balancing her sporting career. One of her key events is the Surf Race and she took out the open women's title at this year's national champs in Ohope.

The team will be led by Cochrane who is no stranger to international competition. He raced in the 2013 International Surf Rescue Challenge in Japan and was part of the Junior Black Fins team for the 2014 Lifesaving World Championships in France.

His main goal for the event is to see his team mates backing each other, enjoying their opportunity to represent New Zealand and competing to the best of their ability while showing a high level of sportsmanship to the other nations and officials. "We are all so excited about this opportunity. I can't wait for us all to have the Black Cap on and make New Zealand proud."

Together with coaches Kevin and Danny Morrison and team manager Steve Vaughan, the team will depart on June 28 for the event that runs from July 2-3 in Miyazaki, Southern Japan.

The two days of racing will include events such as Surf Race, Board Race, Oceanman/woman, Beach Flags, Beach Sprint, Board Rescue Tube Rescue, Oceanwoman Relay and Beach Relay. 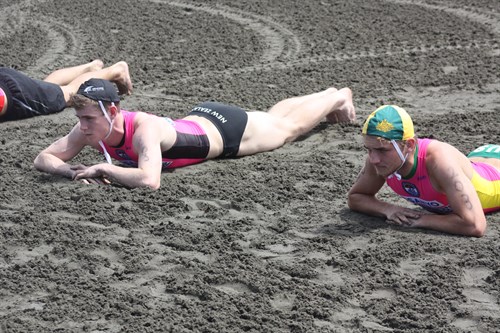