Proud to have The Colonel's backing for another two years

Surf Life Saving New Zealand is proud to have The Colonel's backing for another two years, helping to keep Kiwis safe between the flags.

The partnership agreement with charity partner KFC has been re-signed for another two years.

The partnership has seen our logo featured on 'Surf Safe Variety Buckets' during summer with $1 from every bucket going to SLSNZ together with a supporting TV commercial featuring Surf Lifeguards.

KFC has been a big supporter of our annual Summer Appeal and stores throughout the country have had collection points and, at a local level, the stores have worked with their local surf club to raise further funds.

On top of fundraising, KFC has featured critical water safety messages in English, Maori, Samoan and Mandarin on over 400,000 tray mats in its 98 stores throughout the country each year and on KFC's website and Facebook page, which has an audience of over 40 million.

Surf Life Saving and its clubs nationwide are grateful for the support and look forward to the continuing relationship. 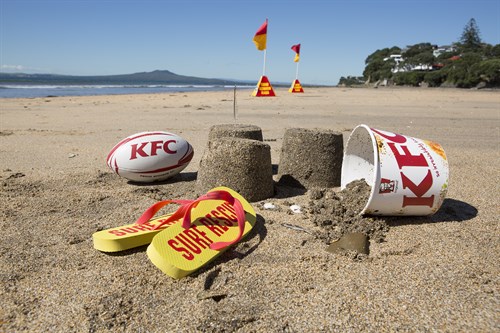